The history of Lake of the Woods Milling Company reads like a soap opera. As is the case with many small businesses, it had its up, up, ups and its down, down, downs over the course of its lifetime –  some quite dramatic. It was the industrial base for the town of Keewatin for 79 years, from 1888-1967 and earned a reputation for milling a fine flour, not bleached, not blended, sold all over the world. At peak production, the mill was grinding 62,000 bushels of wheat daily to produce 10,000 barrels of flour, making Keewatin, according to some claims, the largest milling centre in the British Commonwealth.

By 1913 their flour had gained a loyal and growing following. The next logical step to increase the market was to provide inspiration and instruction to legions of women. The Five Roses Cookbook: Being a Manual of Good Recipes was a compilation of almost 600 recipes carefully chosen from the contribution of over two thousand successful users of Five Roses flour throughout Canada and was issued by the Lake of the Woods Milling Company. 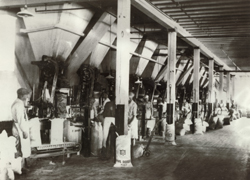 Eighty-nine years after its first publication, the popularity of this culinary resource is undisputed. Requests for a copy are still being directed to various mailboxes by the perplexed staff of Canada Post. For a stamp and between 10¢ and 30¢, these treasures were mailed out and nearly 650,000 copies of this book are in daily use in Canadian Kitchens practically one copy for every second Canadian Home (Note the emphasis on kitchen and home).

Cookbooks are one of the fastest growing genres of books being published today. Their popularity is staggering and the variety of topics, endless. Personally, I can’t resist them. I admit they are my bedtime reading of choice and many meals are planned and carefully considered, even dreamt about, but may never be cooked. After all, where does one get fresh fennel off-season, or vanilla beans in Kenora?

As a fundraiser for a local charity I was formerly involved with, previously owned books were donated and sold annually on a sunny summer day. The most fascinating experience I witnessed throughout these endeavours was the donation of a scrapbook-style cookbook which had been made by the owner over the course of a lifetime. It held all of one person’s treasured recipes, some handwritten and some cut from various publications and pasted into the book. It read not unlike a diary and flowed through the seasons and years without effort. Each recipe was rated and a note describing the occasion for serving them may have also been included. Spills and stains were noted on the pages of some of the favourites.

I was charged with the difficult task of pricing this item. At first, I wanted selfishly to park myself down in the grass and finish paying it the attention it deserved, but this was a fundraiser and it was a busy time. I priced it at $15, an exorbitant amount for an aging, homemade, second- or third-hand book, considering the next highest price was 25¢.

I hoped it would still be there at the end of the day so I could purchase it, but, unexpectedly, it was the first to sell. The buyer stated that she would have been happy to pay twice that for such a rare and personal item. She said it was a timeless peek into someone’s kitchen over the course of many years. I agreed. To say that I could almost smell the happy aroma would be an exaggeration, but it was almost that powerful.

The Five Roses Cookbook has that same powerful effect, and not just on me. This book, passed on for up to three generations now, can be found in many local and Canadian kitchens. For those readers to whom this may be an introduction to this gem, it will become a fast favourite, if not for the recipes themselves, then I am certain you will enjoy the instructions for making the perfect loaf of bread or dainty sandwiches, or how to store flour for maximum satisfaction. Better than a page is devoted to the perfect pie crust.

Charming illustrations are seen throughout and the reprints of newspaper ads extolling the virtues of Lake of the Woods Milling Company flour are used to divide the sections.

The terminology is nostalgic and reminds us of a time when some home economists needed only a list of ingredients to bake the perfect cake.

In her foreword to the reprint of the cookbook, Elizabeth Baird, the food director at Canadian Living magazine, states that The Five Roses Cookbook played a very important role in forging a Canadian style of cooking. In creating a market for its flour, the company’s cookbooks provide inspiration and instruction to generations of women so they could bake a variety of foods, and bake them well. We are the benefactors, generations later of this skill as Canadians are among the premier home bakers in the world. She also notes that this cookbook has the earliest printed reference to butter tarts in Canadian food literature.

My favourite page in the book is the one which states: Pages of recommendations could be printed from experts, chefs of big hotels, clubs, steamship and railway companies, but they could not be so impressive nor would they bring home to you so vividly the perfect efficiency of Five Roses as the following simple, sincere commendations. These are taken from a few of many letters received from housewives throughout Canada who use Five Roses for their everyday purposes. Some of these neighbours are yours. All opinions are unsolicited, and full names will be given at request. 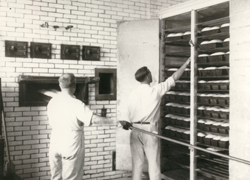 The following are some of those commendations:

“I can say without contradiction that for the past twenty years, I have used the best brands of flour manufactured in the US and Canada and no other brand has given me the same satisfaction as FIVE ROSES.”
– Mrs. M.A.D. – Roundwood, Ont.

“Since coming to Alberta three years ago, I have always used your FIVE ROSES and think it is the best I ever used. It is known as the best in the west.”
– Mrs. H.Y. – Hindville, Alt.