The Women of Kenora

October is Women’s History Month – a time to highlight the past and present contributions of women to Canadian society and to recognize the achievements of women from all walks of life as a vital part of our Canadian heritage.

Besides the many duties and responsibilities of the home that fell to women, the welfare of the community and the country have always been their concern as well. Many were the volunteer organizations formed by local women to improve the conditions of the town. Following is a sampling of some of those local reform organizations.

The first Women’s Institute was formed in Stoney Creek, Ontario by Adelaide Hoodless, a rural farm wife. The motto of the Institute was Home and Country.

On June 23, 1913, the first local branch was formed in Kenora. The members immediately set to work: providing seats on the dock; purchasing books and furniture for the public library; and organizing a clinic for those needing medical attention. The Rideout Women’s Institute was formed in 1928, the Jaffray WI in 1938. 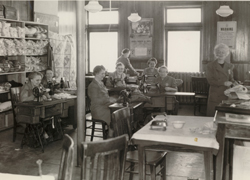 Red Cross workers gather to quilt at their headquarters in the Kenora Public Library during World War II.

During the war, the WI united with the Red Cross in collecting and shipping articles of clothing overseas. In the fall of 1918 when a flu epidemic broke out, it was the women of the WI who cooked and made sure that food was delivered to those in need.

Improvements of health services was often the objective of their efforts. The WI purchased the first ambulance and also approached the Board of Health requesting the appointment of a public health nurse.

The Rat Portage Council of Women was founded on December 3, 1895 by the Countess of Aberdeen, the President of the National Council of Women in Canada. The Council dealt with such issues as: laws for the better protection of women and children, care of the aged and poor, women on the school board, immigration, marriage laws, and the education of women. The local council’s efforts were directed towards the founding of the town’s first hospital.

Red Cross workers gather to quilt at their headquarters in the Kenora Public Library during World War II.

Organized by local women in 1893, the society’s primary concern was to deal with the neglect and suffering of sleigh dogs, which, at the time, were the principal means of transportation. The society’s mandate of care eventually extended to include the sick and unfortunate, and its scope increased to include the whole area, not just the town. Later the Salvation Army worked with the society and together they provided Christmas hampers and handled cases of juvenile delinquency. In 1906, a Children’s Aid Society was formed in conjunction with the Humane Society. The following year, the Children’s Aid was incorporated and carried on as such until 1937, when it became known as the Welfare Society.

Other women’s groups formed in the early part of the century included: The Red Cross, the Women’s Christian Temperance Union, the Women’s Foreign Missionary Society, the Young Ladies’ Club, and the Ladies’ Aid societies associated with various churches in town.

The legacies of local women, past and present, who have participated in volunteer activity are impressive and countless.

During the Second World War German prisoners of war were brought to the Lake of the Woods area to cut wood for the local mills.  Many of the prisoners enjoyed their time in the Canadian wilderness, and a number of them immigrated to Canada when the war ended.