THE DOUGLAS FAMILY STORY & THEIR COLLECTION 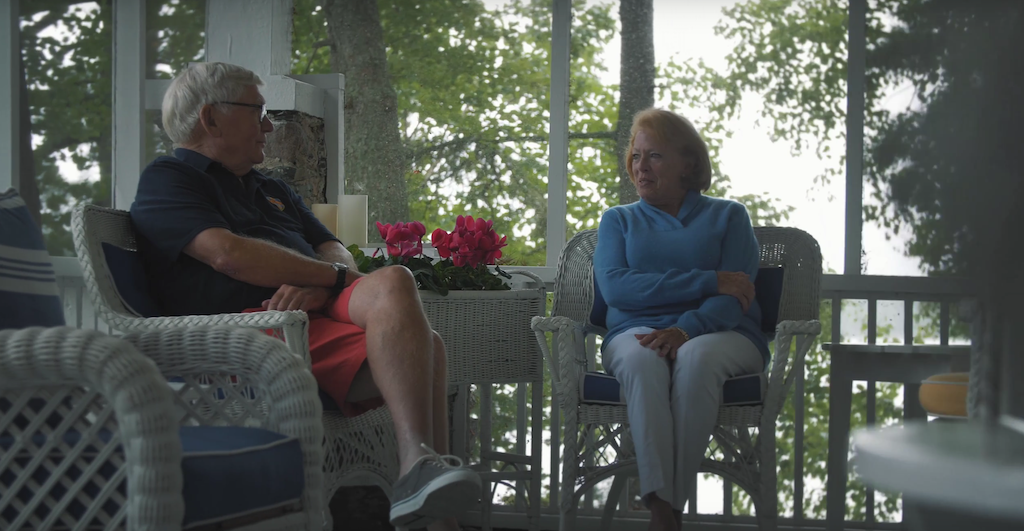 THE GIFT OF ART – by Lori Nelson

It all began with a gift of art. In thanks for their hospitality at their summer home on Lake of the Woods, a guest of Nicki and Bryce Douglas presented them with a framed print. Entitled “Sunset”, it was of a lone pine-covered island set against a backdrop of pinks, mauves and yellows. It reminded the Douglases of the island just opposite their then Keewatin Beach summer home. They loved it and it sparked a curiosity in them about the artist’s other works.

The artist was Walter J. Phillips, an English-born Canadian, who was a master watercolourist but who is best known for his colour woodcut prints. Phillips is considered the pioneer of this technique in Canada. He with his wife Gladys and their son John emigrated to Canada in 1913 and settled in Winnipeg, Manitoba, in his words, for no particular reason”. There he was able to earn a living as an artist. The family eventually grew to include five more children. Their close proximity to Lake of the Woods brought them there during the summers where they vacationed as a family in the 1910s and into the 1920s.

The beauty of the lake was inspirational to Phillips. Some of his best known and most loved works reflect the tranquility and the splendour of Lake of the Woods – qualities that have drawn the Douglas family to the lake each summer for over 50 years. In fact, Nicki has spent every summer of her life on Lake of the Woods. Her parents, the McGibbons, purchased property on Keewatin Beach Road in the 1940s. When Bryce was welcomed into her life in the 1960s, it was understood that summers “at the lake” were part of the deal. And so they have been – for them, their children and now their grandchildren. Lake of the Woods is their heart home, “the most important place for our family to congregate”, in Bryce’s words. 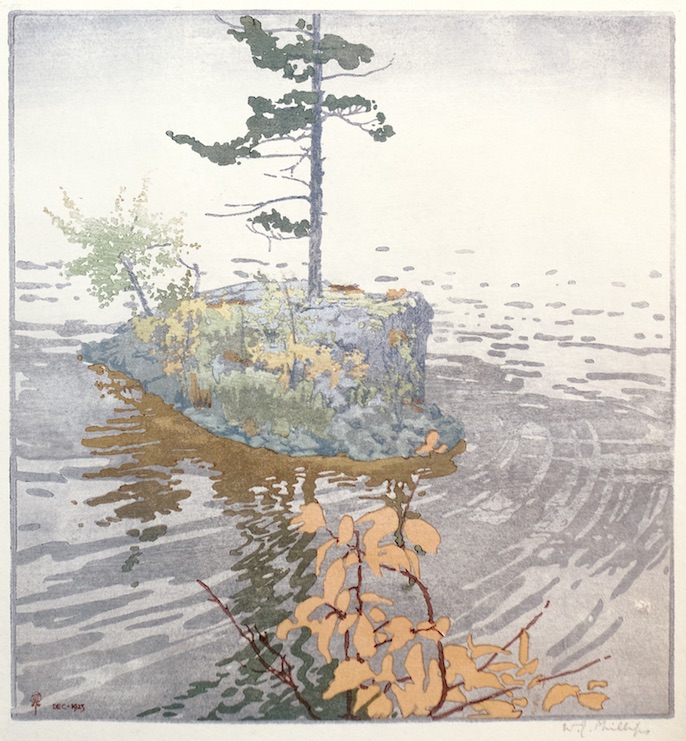 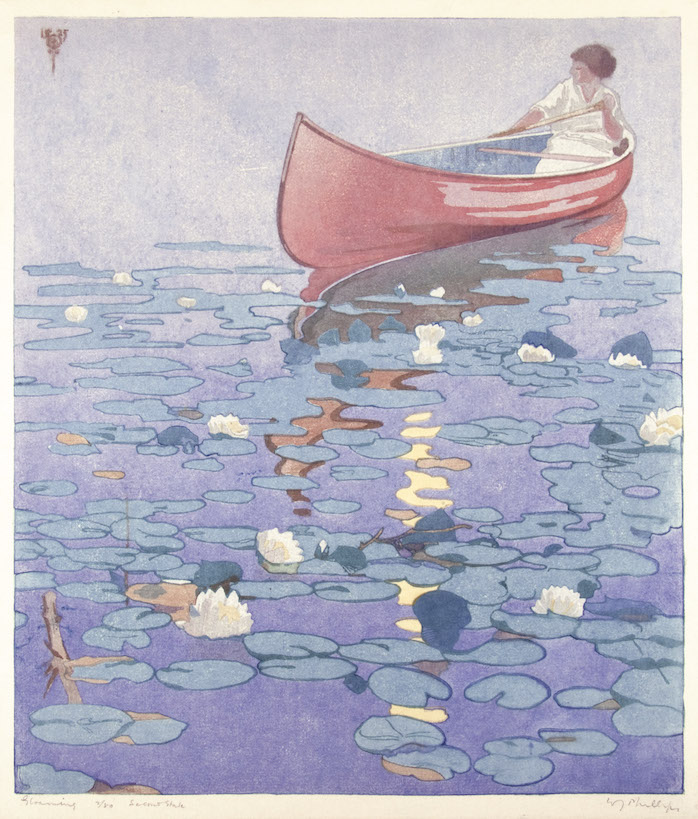 Their love of the lake and their interest in Phillips’ Lake of the Woods works set them on a path to collect each of his colour woodcut prints of the area. Since that first print was acquired in 1981, the Douglases have gathered 64 more prints and watercolours, each depicting W.J. Phillips subtle and nuanced interpretations of the landscapes and waterscapes of a place that means so much to the Douglas family. Their collecting was tentative at first as they came to learn more about Walter J. Phillips and his art and then it evolved very naturally. Enquiries were made at various galleries. Auction catalogues were perused and then dealers began to contact Bryce each time a Phillips was available for purchase. He and Nicki grew their collection, upgrading some of the prints when better conditioned ones were offered and adding one to two or more each year.

For over 35 years, space on the walls of the Douglases’ island home has been found for each new acquisition of a Phillips piece. The hallway leading from the dining room to the living room was lined on both sides with images – one of a single pine branch set against a mottled sky (Morning, 1924); another of a dock, a boat, a father, a son (Rest, 1923); still another of a woman in a red canoe drifting through lily pads (Gloaming, 1921) and more. Hung on a focal wall in the living room was “Summer Idyll” (1926) which shows Phillips’ mastery of the coloured woodcut. The image, of one of his daughters kneeling along a shoreline with arms flung high and wide in joy, involved the cutting of more than 12 blocks. It is considered his greatest technical achievement in the medium. And then above the piano, a small modest print called “The Angler” (1926). In addition to the woodblock prints, the Douglases’ collection also includes a number of watercolours and black and white wood engravings. The collection eventually overflowed into the dining room and so at almost every turn one came face to face with the artistry of W.J. Phillips.

In thinking ahead to the future of the impressive collection, Nicki and Bryce Douglas were certain about a couple of options – they didn’t want to ever sell it and they didn’t want to see it broken up. It seemed logical to them as Nicki said, “for it to live down here” – “down here” being at Lake of the Woods.

As much as the lake has been part of the life of Nicki and Bryce Douglas, so too has been their philanthropic support of causes that range from arts and culture to health care to social welfare. As longtime supporters of the Lake of the Woods Museum they had some preliminary discussions with Lori Nelson, Director of the Lake of the Woods Museum, about donating the collection to the City of Kenora via the Museum. With the current museum building unable to accommodate the impressive collection, we looked beyond the Museum and landed upon a lovely heritage building located opposite it in Memorial Park, colloquially known as the “Museum Annex”. It had been built as a Land Titles office in 1911, later became the first home of the Museum and for the past 30+ years has been leased out as retail or office space. A feasibility study to determine the appropriateness of the building for a small art gallery resulted in a broader vision which involved the incorporation of the heritage building and a 6,800 sq. ft. addition into an art centre. Construction of Kenora’s new art centre will be completed in the summer of 2019. Foundational to its collection will be the Walter J. Phillips collection of Nicki and Bryce Douglas.

So begins a new chapter for this collection of W.J. Phillips’ Lake of the Woods works – it too all began with a gift of art.

Walter J. Phillips is one of Canada’s most celebrated artists, who created hundreds of watercolours, etchings, engravings, and colour woodblock prints in his lifetime.

Born in England, Phillips displayed natural artistic talent from a young age. He studied art in Birmingham, and enjoyed success as a watercolourist.  This lead him to a career as a teacher and commercial artist. In 1913, Phillips left England and immigrated with his young family to Winnipeg, Manitoba, where he took a position as an art instructor at St. John’s Technical College.

Walter J. Phillips became good friends with fellow artist Cyril H. Barraud who introduced him to printmaking and the etching process.  When Barraud enlisted in the Canadian army, Phillips bought his printing press equipment and started producing etchings in addition to his watercolour painting. It was in 1917 that Phillips was introduced to the Japanese colour woodcut and became an avid student, dedicated to perfecting the technique. Phillips adapted his newfound medium with a contemporary vision of the Canadian landscape.

An innovator and technician, Walter J. Phillips is considered the master of colour woodblock printing in Canada. Watercolour was a consistent medium throughout his career, both as masterful English style paintings and plein air studies. As a printmaker, Phillips ultimately came to prefer and produce more colour wood block prints than etchings or engravings. Phillips was very prolific during this time, inspired by Winnipeg and the surrounding prairie, as well as the summers spent with his family on Lake of the Woods. 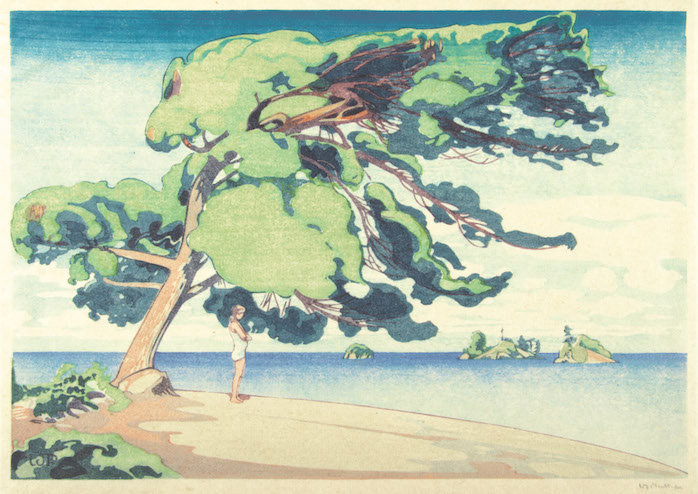 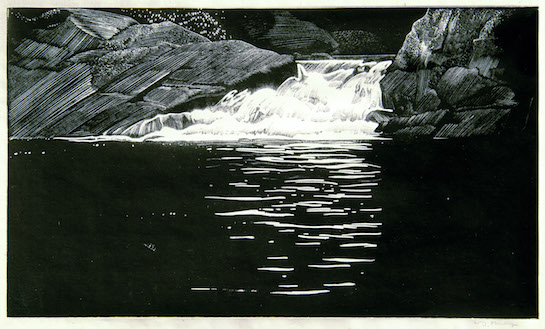 Phillips was very active in the artistic community: in addition to instruction, he became president of the Manitoba Society of Artists in 1926. Not only a prolific artist, Phillips was also an avid writer — the written word a further expression and compliment to his work. He contributed regularly to the column Art and Artists for the Winnipeg Tribune. Phillips also wrote many manuscripts, some published, sharing knowledge about art methods and techniques, as well as expressing his opinions about artists, art critics, and the art world in general. Phillips believed that the public was important to artists and so sought to interest and inform that public. Today his writings serve as an important technical reference for artists, as well as a historic record of the Arts of his time. 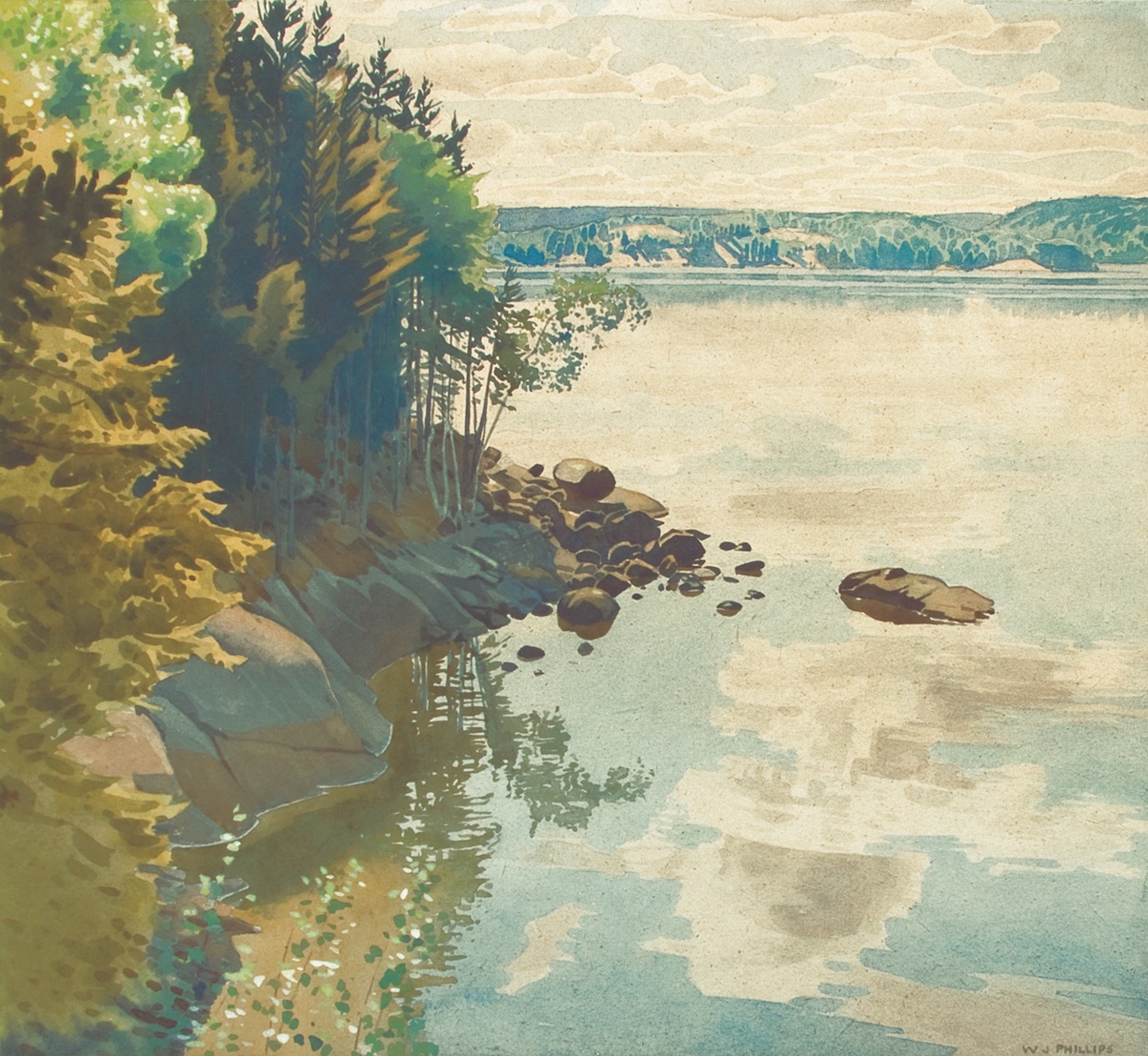 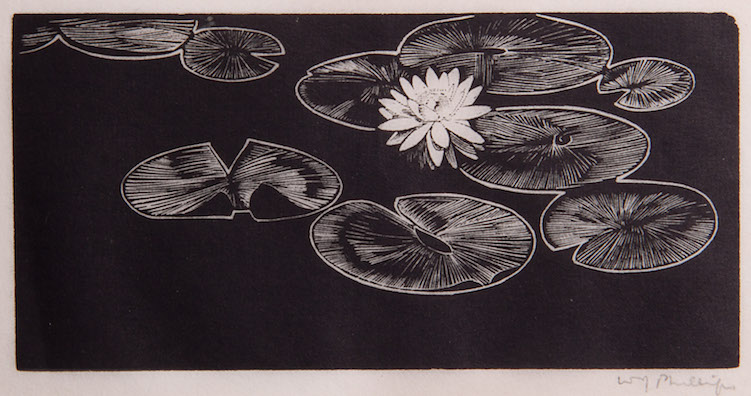 W.J. Phillips spent the next 15 years dedicated to his artistic practice, making repeated trips from Winnipeg to the Rockies and, in 1927, to the West Coast of British Columbia. For the next 10 years, his work continued to be informed by his surroundings on the prairie as he began to explore and produce engravings in addition to his colour woodcuts and watercolours.

In 1940, Phillips left Winnipeg to become a resident artist at the Banff Centre, at the time known as the Banff School of Art. He moved to Calgary one year later and taught at the Provincial Institute of Technology and Art, while still continuing to teach in Banff. During this time, Phillips’ art began to focus more on watercolours and less on printmaking, with his last print produced in 1952. These years gave rise to some of Phillips’ most stunning watercolours. Phillips was a popular teacher at both these schools until 1959, his presence and love of printmaking has been attributed to the rise of artists producing works in the media at that time. A gallery at the Banff Centre has been named in his honour.

Phillips began to suffer vision loss from cataracts and moved to Victoria with his wife in 1960. Walter J. Phillips died in 1963.

Walter J. Phillips’ technical expertise combined with an ability to convey the majesty of the landscape made for a style that connected with people. His artwork has continued to be avidly acquired by collectors privately, publicly, and corporately, both nationally and internationally.

Walter J. Phillips was inspired by the Canadian landscape. Throughout his career, spanning the 1900s through the 1950s, Phillips would exhibit his work across Canada, the United States, and the United Kingdom. Few other Canadian artists have left such an enormous body of work as Phillips, whose subjects included the people and landscapes of his native England, Northwestern Ontario, the Canadian prairies, the Rockies, and coastal British Columbia.

One of the greatest public collections of Walter J. Phillips works can be viewed at the Pavilion Gallery Museum in Winnipeg, Manitoba. This collection consists of 650 W.J. Phillips works donated by John P. Crabb to the city of Winnipeg. Phillip’s pieces are numbered in the collections of many outstanding institutions including the Smithsonian, the Victoria and Albert Museum in London, and the National Gallery of Canada.