Teeing Off: Golf’s Beginnings in Kenora

While Lake of the Woods was the scene of most of the summer’s entertainment for Kenora residents and visitors in the early days, there were those who felt that boating, fishing, and swimming might not appeal to all the potential tourist trade. A wider variety of leisure activity opportunities was considered necessary to boost the area’s appeal as a summer resort.

As a result, in 1912, discussions got underway regarding the development of a golf course and club. 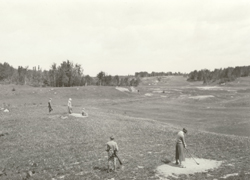 The Following Appeared In An Issue Of The 1912 Miner And News:

“It is likely that an effort will be made at once looking to the organization of a Golf Club and securing the necessary grounds for links. The question had been discussed on different occasions and it seems to be the general opinion that this is one feature which the town lacks to make it the most popular of summer resorts. During the past few seasons, it has been pointed out by some of our summer residents that it is almost necessary for us to have golf links within a reasonable distance from town, in order to encourage many devotees of the game to spend their summer vacations here. The enthusiastic golfer misses his game, with its consequent exercise when he’s here. They all admit the charm of Lake of the Woods; the beauty of the scenery, etc. but they feel they would enjoy it better if they could have an occasional game of golf. A number of those who have homes on the lake, and who frequently invite guests to spend a few days with them, find difficulty in entertaining them at times. This difficulty would be removed, they believe, if they could take them out for a game of golf.”

While the town officials, Board of Trade, and locals were in favour of having a course, the difficulty was in securing cleared land.

One of the first proposals was that the course be located on Town Island. The 200-acre island was large enough in size to provide ample acreage for a course and a park, but the inaccessibility of the island was an obvious drawback. This proposal was abandoned.

Finally, in 1922, a club was organized. The Greenwood and Metcalfe family farms were purchased. Shares were sold for $100 each in order to raise funds for the clearing of the course and the construction of the clubhouse.

Early course preparation involved clearing stones from the course with horses, and fairways and greens were maintained with horse-drawn mowers.

On July 5, 1924, the course was open for play. It wasn’t until the summer of 1926, though, that the new clubhouse was complete. The new building had a kitchen, large gathering room with fireplace, locker rooms, and the golf pro’s apartment.

Jack Vernon, a pro-golfer from England, was the club’s first pro.

Under his guidance the course became one of the prettiest and most challenging in this part of the country, said longtime golfer, Roger Swanson.

Jack Vernon also trained all the caddies. There were about 50 of them employed by the club in the twenties and thirties, and Vernon tested each caddy to ensure that they were polite, able to keep up while carrying heavy golf bags, and handled themselves well on the course. Caddies were assigned on a first come, first serve basis, and the young men received 25¢ per round, although 5¢ of that went to the club. They also received tips. Usually they weren’t allowed to play, however, this rule was waived in return for special jobs done around the course, like bringing ice from the old ice house to the kitchen, or raking the roughs or weeding the greens.

Donations of trophies for competition were made by George Drewry, Mrs. Seegmiller, James Link, Earle C. Popham, Mrs. J. Gunne, T.D. Ruggles, and others. They were presented for both men’s and women’s competitions.

Over the years, improvements and expansion to the course and clubhouse have been made. In 1988, another nine holes were added. There has been a change in maintenance equipment and in golfing equipment. Caddies are a thing of the past. Golf carts have taken over. The number of clubs has increased and so have the number of people involved in the sport.

The original telegraph lines from Winnipeg to Rat Portage were hung along the tops of living spruce trees.