One would think it safe to assume that an annual event would be held each year. Not necessarily so, at least not when it came to the annual dog derby held in Kenora.

The first annual made its debut in April 1899. The second followed 25 years later. The next came after a three-year hiatus, and then things finally got back on track. Seven consecutive years and seven dog derbies.

No doubt it was optimism that caused organizers to tag the annual adjective to their event, and it seemed that their enthusiasm was well-founded. Witness the 1899 race of boys, their dogs, and sleds. For excitement, sport, and amusement, nothing could have been better. 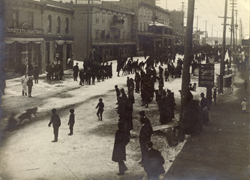 The course was two blocks in length, from the Post Office (now City Hall) to the corner of Main and Second Streets. Hundreds of spectators lined the course, eyeing up the competitors and wagering anything, from a stick of spruce gum to a $5 note, on their favourite. They soon learned though, as the local newspaper noted, that betting on a dog race was as much an uncertain quality as is… figuring on the possibility of one whom the smiles of a handsome woman might alight.

A series of races was held – single dog, tandem, and double team. A prize was also awarded to the best trained sleigh dog, and for the judges that might have been a difficult call to make.

While there were plenty of starters, there were only a few that actually crossed the finish line. Some dogs got as far as the first block and then took off on an exploration behind the Hudson’s Bay store, despite the valiant efforts of their owners to keep them on course. One team flew wildly into a crowd of onlookers, standing one poor fellow on his head. Others got about halfway before hackles went up and a general scrap erupted. Owners and spectators dove into the maelstrom of bristling hair, bared teeth, and vicious growling, and then the dogs got into the action, too.

Neither skill in dog-handling or speed were strong elements in that first race, but those seemed secondary anyway, when compared with the entertainment value. Although touted as a huge success and the beginning of what was to become an annual event, another dog derby wasn’t held in town until March of 1924. It too was an annual one-time event.

It wasn’t until 1927 when local businessman Alexander Shragge organized Shragge’s Ltd. Dog Derby that the event rightfully earned the title of annual. The race, open to entrants 15 years of age and younger, was more challenging than its predecessors. Instead of the two-block straight-away sprint of the previous years, the course was a convoluted three-mile run that had the pack panting up hills, crossing bridges, negotiating dog-leg turns, and hotfooting it on the straight, flat home stretch.

Now get out your map for this… The race started on Main Street South in front of Shragge’s store (near the present Boston Pizza), headed north to Third Street, east to Matheson, then south to First Avenue, and into Lakeside, up Second Avenue to Sixth Street, across to Fourth Avenue, across the creek and up to Park Street, west along Park to the YMCA (now the Legion), and up Matheson Street to the top of the water tower hill, west down to Main Street North, under the subway, then to Main Street South, and finished where they started at Shragge’s. Boy Scouts were stationed along the course to direct the mushers on their way.

That year, 17 boys and their dogs showed up at the start line. They were started in groups of four with two minutes separating each heat. But even before the race began, there was an outbreak of skirmishes between the dogs. Once settled, some dogs actually had to be pulled the first one hundred yards to get them going. In the end, Leonard Page crossed the line with the incredible time of 14 minutes, 34 seconds, averaging a speed of 12 mph, and winning the $15 first prize. His win was questioned by some however, since he’d been forced to pull his dog the last few hundred yards, beating out seven-year-old Pat King, who had stayed on his sleigh to the finish. Only six seconds separated the two finishers. But, with no rules prohibiting his finish, Page won fair and square with a time that was unbeaten until 1931. Several hundred spectators witnessed that race, some becoming more involved than they should have, sometimes swamping the competitors and often making it difficult for the boys and their dogs to fight their way through to the finish.

For the next few years, between 15 and 18 youngsters and their dogs vied for the top three places and the prize money of $15, $10, and $5. A few changes occurred. In 1928, a new rule was implemented after the controversial finish of the year before. In order to qualify for a win, contestants had to ride their sleigh from the Post Office to the finish line. The following year, Eleanor McLaughlin entered with her dog, Rover, subsequently causing organizers to open the race to both boys and girls. But that was the only year Eleanor competed, and the first and last time a girl participated. 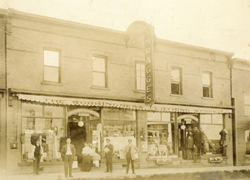 The competition intensified each year. The young mushers became more and more familiar with the course and many practice runs were made leading up to the actual race day. Among those competing were: Jack Lunny and his dog Carlo; George Jackson and Teddy; Pat King and Bob; Murray Pedden and Bruce; Ed Noseworthy and Toby; Leo Favreau and Bruno; Ken Hull and Carlo; Eddie Olson and Fly; Bill Fraser and Rex; Morgan Whitta and Jiggs; Cyril England and Buster; Jim Moon and Buster; Laurence Paul and Buster; George McInnis and Buster. Is it any wonder that there was confusion at the start line?

After three years though, entries declined as youngsters opted not to participate if they thought they couldn’t win. In 1932 and 1933, only four entrants nosed up to the line. With numbers dwindling, Mr. Shragge considered shortening the course, hoping that would induce more racers to participate, but in the end, decided that the annual event had run its course.