Horse Racing On Lake of the Woods

In the late 1890s and early 1900s, it was not an uncommon sight to see horse and cutter races taking place on the frozen bays around Rat Portage. Half-mile or one-mile courses were cleared on the ice, usually by a team of horses pulling squared timbers. Crowds of gambling enthusiasts would flank the track, and keen competition would follow.

A horse and a half-share in a mining claim was the prize in one of the earliest recorded horse races on Lake of the Woods. In December 1897, Captain Brydges’ Sandy and Mr. Knox’s Gentleman Jim nosed up to the starting line in Keewatin Bay. A large crowd assembled to witness the much talked-about challenge and a reporter for the local newspaper recounted the race: 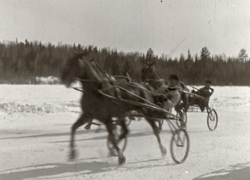 “The race was straight away one mile with the wind just where it ought to be behind the speedy horses. The track would be hard to beat anywhere…Of this particular race it can only be said that we are greatly surprised that so well posted a man as Mr. Knox should have allowed himself to be so greatly deceived relative to the merits of his horse. It was evident to the most casual observer that the race was a farce of the biggest kind, and Sandy appeared to enjoy the joke immensely. Anyhow he cantered in with two heats to his credit and from the manner in which Gentleman Jim behaved it was evident that his preparation for the contest was of the crudest kind.”

So enthusiastically was the new sport received that shortly after that race, the Rat Portage Racing Association was formed. It was the intention of the Association to hold winter meets at which all the fast horses in the Northwest and East could compete on a track laid out either on Laurenson Lake or on the bay. Either was considered, at least locally, the best place for a course in Canada.

By 1905, horse racing had become so popular that races were heing held every couple of weeks on Keewatin Bay. The course was a half mile straight away with eight different tracks cleared side by side. There were usually three events, aptly named, the free-for-all, the free-for-a-few, and the any-old thing class. Cigars, rather than money, were the main staple of the betting crowd.

The race horses were generally owned by local businessman. One old-timer remembers large pictures of the horses gracing the walls in hotel lobbies. He also recalls a Norman man who owned a horse named King. It was customary for this owner to load his horse up with whiskey before every race to give him that extra little zip. Not quite enough zip apparently, for no one ever heard of King winning a race.

Interest in horse racing began to flag around 1910. The Kenora Driving Club had been organized a few years earlier and ran weekly races. Their track ran from McLeod Park to Bunnell’s Point on the east side of Coney Island, but in spite of the club’s efforts they were unable to sustain enthusiasm for the sport.