Giant geese, oversize nickels, five-storey axes, and life-sized mammoths – driving across Canada in the 1960s you could see them all. Kenora, not to be outdone, erected its own special attraction. There was a lot of debate about what to name it, but in the end a snappy name with an environmentally friendly tagline won the day. We all know it as Husky the Muskie.

Before 1949 it wasn’t possible to travel uninterrupted across Canada from coast to coast. Large sections of the country weren’t connected by road. The Federal Government passed the Trans Canada Highway Act in 1949 and construction began in 1950. By 1962 Canada had been linked from coast to coast for the first time, making it possible to drive from the Atlantic to the Pacific Ocean. With the coming Canadian centennial, the completion of the east-west link provided a chance for centennial-inspired Canadians to affordably see their whole country for the first time.

Like our American cousins and their interstate highway system, Canadian businesses and communities scrambled to create roadside stops for the coming tourist boom. Restaurants and motels were the order of the day. This was fine for the tired and hungry traveller, but how would you get someone to stop in your community if they were well rested and had a full belly? The answer was roadside attractions! Across Canada community groups, businesses, and concerned citizens erected great statues and monuments for tourists to stop and see.

Examples like the afore-mentioned giant goose in Wawa, the world’s largest oil lamp in Donalda, Alberta, and the world’s largest lawnmower in Enderby, BC are just a few of the attractions built in the 1960s to tempt tourists to stop for a rest, take a photo and maybe buy a t-shirt.

The idea for Husky the Muskie came from members of the Kenora Chamber of Commerce. Not to be outdone by a silly goose, the members decided that a sport fish should be erected at the north end of the lake. And not just any fish. The mighty muskie! King of the sport fish! The fish of 10,000 casts! In a spot of honour at the most northern part of the Lake of the Woods, McLeod Park! A new bridge to Tunnel Island had been built in 1959 as part of the Trans Canada project, and the former road bed would provide a parking lot for weary tourists looking for a prime photo op.

With the decision to build a giant fish came the question of how to pay for it.  The committee was chaired by Marc Marcino. Marcino worked with other Chamber members to beat the bushes for donations from businesses and private citizens. Jules Horvath of Deluxe Signs designed a scale model of the proposed statue in record time. Marcino’s committee raised $5,000 in a matter of months. With finances in place the construction was soon in full swing. 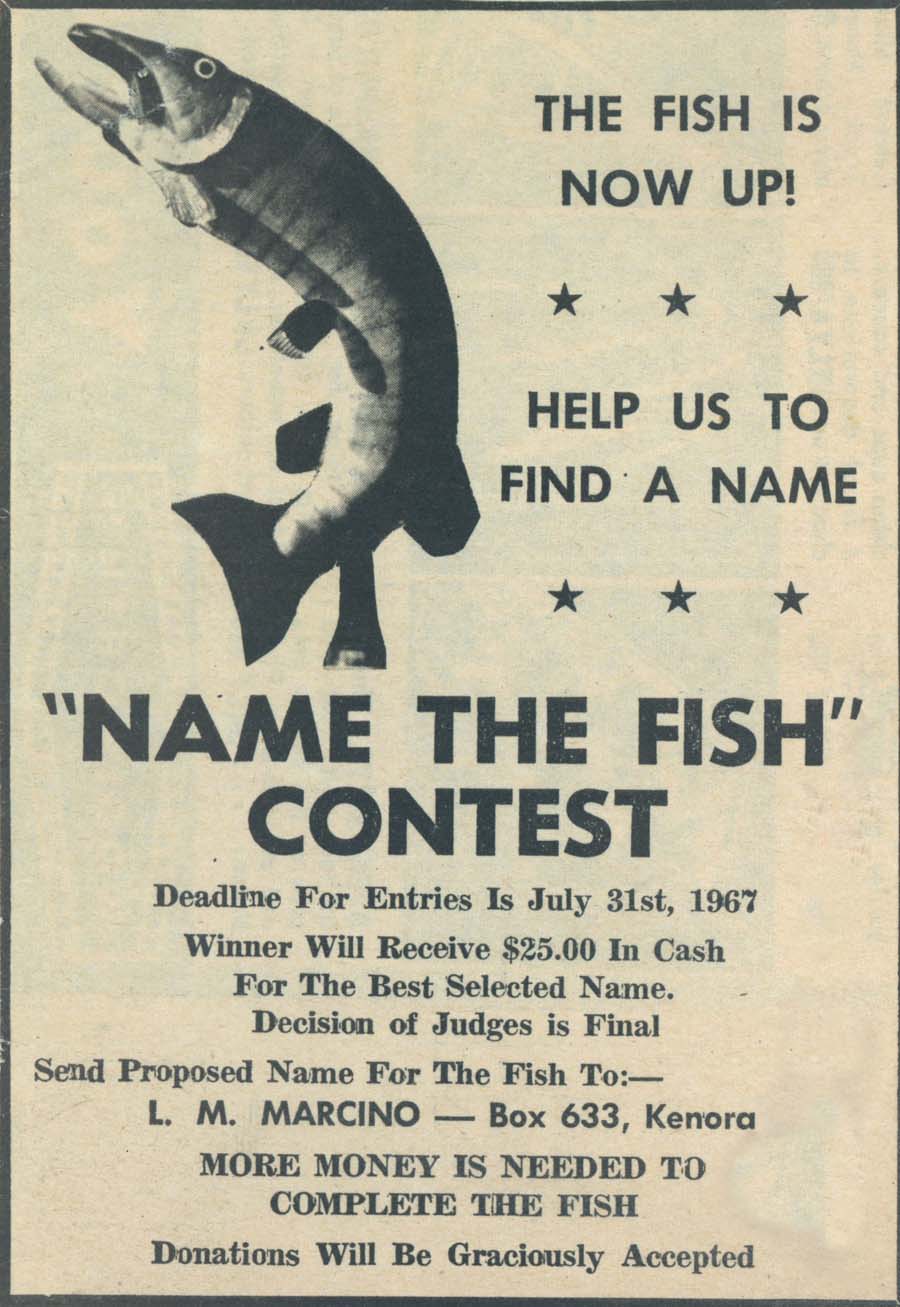 The centre structure of Husky is a 50 ft steel I-beam. The two halves were then constructed in the shop, and mated on the I-beam to form the shape of the fish. From there Husky was painted and polished and all ready to be unveiled.

The official unveiling of the Kenora Chamber of Commerce fish was on July 1st, 1967. Despite having a birthday, Husky didn’t get his name until about a month later. Marc Marcino and his committee solicited the community for suggestions for the name of the fish. Some were pretty good – Rocky, Longee, Leaping Lizzie, Peter the Pike, Muskinozha, or Moe.  Some were less so – Ken-Kee, Muskicen (muskie-centennial), Welcomuskie-nora, Rat-Nor-Kee Muskie, Centum, and Igotaway. In the end it was Bill Brabrooke’s suggestion that won the day. Though others had suggested the name “Husky” it was Brabrooke that suggested “Husky” with the additional slogan of Husky the Muskie says Prevent Water Pollution.

The name and slogan was a hit, and soon Husky became one of the top roadside attractions in Canada. From coast to coast families did make the trek across the country, and many thousands stopped off on the northern end of Lake of the Woods to visit with Husky.  There was even some hope that Husky the Muskie would become a Smoky the Bear type mascot for clean water, but in that regard Husky was a little ahead of his time.

Husky the Muskie remains one of the enduring images of Kenora and is a touchstone of childhood family vacations for people across Canada. Though Husky has been touched up and even rebuilt, the great fish remains true to the original vision. Husky stands proudly at the north end of Lake of the Woods, dutiful at his post, reminding us to pull over, enjoy the lake, and of course to prevent water pollution.