Where is the Real Massacre Island?

On an afternoon in early June, Jean Baptiste LaVerendrye, Father Aulneau, and 19 other men set off from Fort St. Charles in three large canoes. They were headed for Kaministikwia and then Michilimackinac, where they were to restock and bring back much-needed provisions. Their journey, however, ended only a day’s paddle away on an island named for the violent and bloody fate of the young voyageurs – Ile du Massacre.

There, the bodies of the 21 men, beheaded and brutally slain, were found several days later.

Accounts of the brutal slaughter of the Frenchmen by Sioux Indians were related in letters and journals.

“Their heads had been placed on robes of beaver skin, and most of them with the scalp missing. The missionary was kneeling on one knee, an arrow in his side, a gaping wound in his breast, his left hand resting on the ground his right hand raised. The Sieur de la Verendrye was stretched on the ground, face downward, his back all hacked with a knife; there was a large opening in his loins, and his headless trunk was decked out with garters and bracelets of porcupine quills.”

Tales of it were passed on through the oral tradition of story telling, but it seems that in this historic game of Pass It On, the facts became skewed. Each account was slightly different from the one before it. 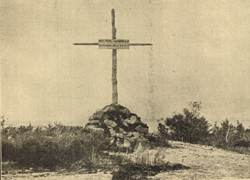 Photograph from booklet entitled Out of the Grave – The cross erected on the Canadian Massacre Island.

Father Belcourt, a missionary in St. Boniface, Manitoba, travelled across Lake of the Woods, accompanied by an older Native man who claimed that his father had helped prepare the sepulchre for the murdered Father Aulneau. They stopped on this island where the French priest said his companions had been massacred. Belcourt, relating what had been told to him by his guide, gave this account…

“Early one morning, a French canoe manned with eight men left a trading house which the French had built about the middle of Lake of the Woods, and stopped upon an island near the last pass, to enter the river to Rainy Lake… Having built a fire to take their repast, the smoke rose up and was perceived by a party of Sioux warriors who were approaching the same island by a branch of Rainy River called the Road of War. These, having landed on the opposite side of the isle unperceived by the French, fell upon them unawares and massacred the missionary and some of his companions; the others throwing themselves into the water in order to cross over to some other island were drowned. The event took place about the year 1750.”

Dr. John Bigsby travelled the lake and was told of a bare and rocky island on which a Catholic missionary was believed to have been murdered with five or six canoemen. He was told the massacre had taken place 60 years earlier in 1790.

Given the variety of accounts in circulation, it’s little wonder that the exact location of the massacre is still a matter of debate.

A group of Jesuits from St. Boniface College organized an expedition to Lake of the Woods with the hope of locating Fort St. Charles and the infamous Massacre Island. With the assistance of a Captain Laverdiere and some Ojibway who, through tradition, knew of its location, they were able to find the small island where the 21 men had been killed.

There, they erected a cross on the highest hill, marking the place where Father Aulneau, the young Jesuit martyr, had been murdered. On Canadian lake charts after 1905, the island is indicated as Massacre Island. On earlier charts, another island on the American side of the lake, bears the name Ile du Massacre. 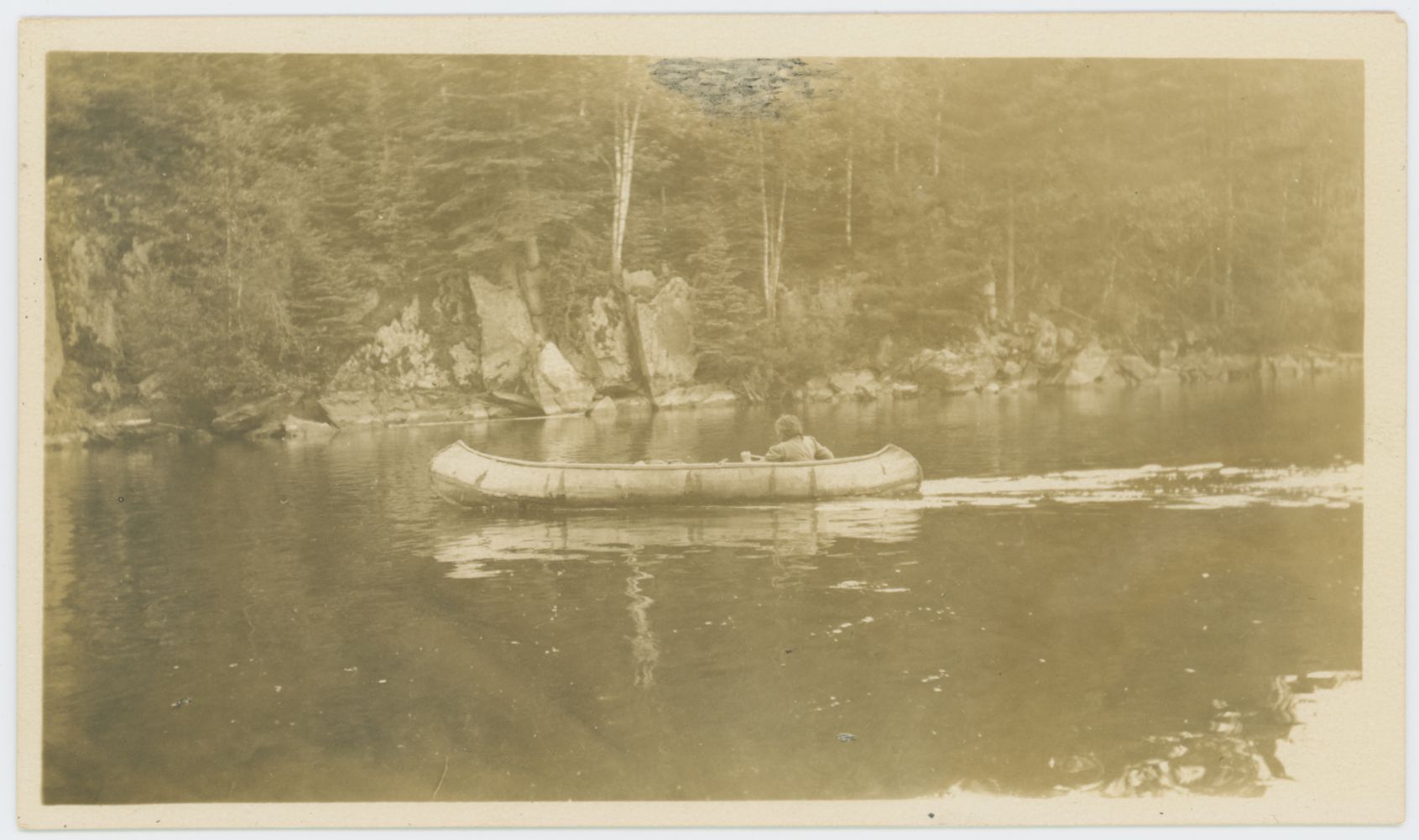 WHERE IT THE REAL MASSACRE ISLAND?

The debate centres around three major issues – the description of the island, its distance from Fort St. Charles, and its location along the most likely route taken by the Frenchmen.

The most accurate, and regrettably scant, description of the island was provided by Pierre de la Verendrye in his journal. He wrote that the massacre had taken place seven leagues (roughly 21 miles) from the fort on a little island.

The Canadian Massacre Island is located south and east of Oak Island. It’s about 3/4 of a mile long and 1/4 of a mile wide, encompassing 60 acres of land. The western side rises in rocky slopes to a hill, the site of the Jesuit cross.

Proponents of the Canadian Massacre Island claim that it’s on the route most likely taken by the Frenchmen – south and east, passing through the sheltered waterways between what is now known as the Aulneau Peninsula, north of Big Island, between Split Rock and Painted Rock Islands, then eastward through Sabaskong Bay. From there, the route passes into Kakabikitchiwan Lake and then through a series of small lakes into the northern arm of Rainy Lake. It seems logical to this group of researchers that the favoured route would have been the one that was the most sheltered.

Not so, say others who assert that the Frenchmen would have taken the most direct route, given the urgency of their mission. From Fort St. Charles, they would have paddled east of Oak Island and then headed directly south across the Big Traverse to the mouth of the Rainy River. The American Ile du Massacre, located between Garden Island and Big Island, falls directly on this southern route.

According to Antoine Champagne, an authority on LaVerendrye, this was the route that was used by many hundreds of voyageurs who travelled to and from the west, between Lake Superior and Lake of the Woods. Evidence of this is provided in accounts written by La Verendrye, Alexander Henry, Dr. Bigsby, Father Belcourt, and Hind and Dawson.

Also, the large French canoes lent themselves to the bigger water and would have been troublesome on a route that involved as much portaging as the sheltered eastern route. The Rainy River, on the other hand, was considered a very fine river, broad and calm with only a couple of rapids.

Tradition also favours the US island. On American maps, dating back to 1841, the small island is called Ile du Massacre. On Canadian charts, it was also known by that name until shortly after the turn of the century. Then Canadian chart-makers removed the name and instead bestowed it on the Canadian island, which up until that time had been known as Manitou.

A change in lake level due to the building of a rollerway dam on the Winnipeg River in 1888 must also be considered. A raising of water level of about three feet had a considerable effect on the south end of the lake, where depths were shallow in some areas, meaning that some islands today were either bigger or attached to the mainland in the 1700s.

To further complicate the issue, other islands have been suggested as the site of the massacre. Little Oak Island, where a cairn was erected, is another candidate. No one seems to know why or when the cairn was raised, but that island, too, lies along the route south of Oak Island to Rainy River, and could possibly have been the stopping place of the voyageurs.

In 1979 when Eric Wells, a freelance writer, was researching the debate, he was sent a copy of a letter written by the Canadian Permanent Committee of Geographical Names when the name of Manitou Island was changed to Massacre Island. It read:

“It is more or less immaterial which is the exact point or island on which the massacre occurred, but since the memorial chapel has been erected on an island to commemorate the incident, it seems appropriate that this should be known as ‘Massacre Island’.”

Such are the shortcuts of history, noted Wells.

We may never know exactly where the massacre took place. Years of research have yielded nothing conclusive. Now, given some of the facts and perhaps a trip down on the lake for some exploration of your own, you decide. Such are the shortcuts of history.

The original telegraph lines from Winnipeg to Rat Portage were hung along the tops of living spruce trees.