In an area that is at once graced and cursed with a six-month winter, the philosophy of the residents has necessarily evolved from “we-can-survive-this” to “let’s-make-the-most-of-it.” Winter has become not only something to cope with, but also a time to delight in those activities and sights that can only be revelled in when our world is white and chilly.

Before mechanized sleds were beating a path through the bush, wooden-constructed, gravity-drive sleds were the vehicles of choice. Toboggans and skis constructed from old barrel staves ruled the hills. And in due course – when an activity gets popular, it gets organized – a ski club was formed in Kenora in 1921.Withing two weeks, a ski jump had been built on Blueberry Hill on Coney Island, followed a couple of years later by a toboggan slide.

The tree-lined path across the ice from the Main Street Dock to Coney Island was a busy thoroughfare on the weekends. However, the saftey of the route was brought into question only a year and a half after the opening of the toboggan slide. With the enlargement of the channel at the eastern outlet of the lake into the Winnipeg River, the current had increased in Kenora Bay, making ice formation iffy at the best of times. 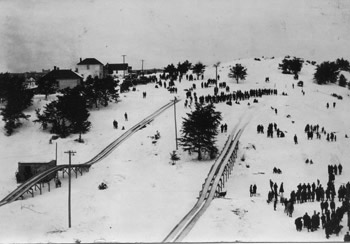 The questionable safety of the ice crossing caused the abandonment of the Coney Island slides and ski club officials began to look for a site on the mainland.

Municipally-owned property in Lakeside became the focus of their efforts. The natural bowl-shaped valley between the hills opposite Seventh Avenue South (then referred to as Gold Street) was ideal and so an application was made to the Town Council to set aside the land for a winter park.

The Town Council agreed and with the assistance of a municipal grant and commercial sponsorship by the Keewatin Lumber Company, the toboggan slides and ski jumps were built. A lighting system allowed for evening activity in the park, and heated washrooms provided warmth and other relief as necessary.

Hundreds, with toboggans in tow, gathered at the park on November 27th, 1926 for the official opening. The twin toboggan slides ran north and south allowing for almost continuous sliding in both directions. The runs started at the top of one hill, valleyed out in the centre, and ended up at the top of the opposite rise, solving the traditionally pesky problem of having to pull one’s toboggan back up the hill. 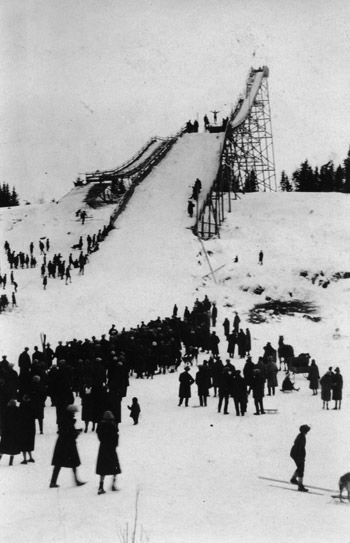 Only standard toboggans were allowed on the slides and, if necessary, were available for rent for 25c or 50c depending on the size. With a seasonal pass costing $1.00 for adults and 75c for children, good use of the slides was made both day and night.

The ski jump was completed shortly after and boastful claims had it as one of the largest artificial slides on the continent, bigger in size and with better natural advantages than the slides in Duluth, Ironwood, and Winnipeg.”

The immense structure was situated on the south side of the hill and from the top a splendid view of the entire town could be had. The jump was designed to allow for half-way and full-way starts. As well, a smaller juvenile slide was built as a training site for young, up-and-coming jumpers.

The local press had this description to offer: “When the slide is finished it will allow a jump through the air of one hundred and fifty feet after leaving the take-off, and it will take a mighty good skier to use up all that available space. Local experts claim that all that is needed for ski jumping is good equipment and a certain amount of training. After looking the slide over, we are of the opinion that a large amount of nerve is also necessary.”

There seemed to be no shortage of nerves among the young men and women of Kenora. Arthur Seegmiller, Saul Silverman, Rune Ostling, Jim Francis, Art Peddon, Isabelle Wickstrom, and Gertrude Wilcox were keen ski jumpers who were anxious to show off their high-flying techniques on the new jump.

Intimidating as the lofty ski jump was it seems that there were far more accidents on the toboggan slides. The first one happened only weeks after the slides opened. A young man had his arm broken when the following toboggan smashed into him. There were other casualties. Reports of concussions and fractured legs made the headlines as stern warnings to those using the slides.

But it was the fatal accident of a five-year old girl in February of 1927 that jarred the community and had ski club officials questioning the supervision and safety of the slides.

The head-on collision of the two toboggans had been accidental and regrettably unforeseen. There were always at least two men supervising, and warning signs as well as a set of rules were posted – still criticism was launched over the policing of the slides.

In the wake of the tragedy came more difficulties. A blasting wind storm the following summer blew down the top two spans of the ski slide. Although volunteers were mustered to assist with the repairs, the cost for replacement materials was beyond the financial capabilities of the club. An appeal to local businesses and citizens was unsuccessful and the damaged ski slide sat idle.

In the following years, the toboggan slides continued to be maintained and used. Alterations were made in an effort to make the slides accident-proof. As well, an outdoor skating rink was added to the facilities.

It wasn’t until 1937 that the interest in ski jumping in Kenora took an upswing. Mel and Elof Peterson were local ski jumpers intent on revitalizing the sport, and so they constructed their own jump on Sixth Street in Lakeside.

The Peterson boys were joined by Art Johnson, Jim Paton, Bert Ronnebeck, and others. After holding a number of informal competitions with jumps raning from 50-60 feet, the skiers held a public meeting to organize a club. The Lakewood Ski Club was formed as a result. Jumping and corss-country skiing were promoted, and Kenora produced a number of talented jumpers who went on to compete in national and international tournaments.

In 1939, the Winter Sports Club took over the Kenora Golf Course during the winter months. The new location had downhill ski runs and corss-country trails. Unfortunately, there were no facilities for ski-jumping and the sport that had sparked such an interest in participants and spectators ended after a run of only 16 years in Kenora.

The site of the Lakeside winter park is now a residential area. Where skiers once flew through the air, and where tobogganers raced along the snow track, a roadway runs. All that remains of the site’s early role in the enjoyment of Kenora’s winters are the hills and valley between. 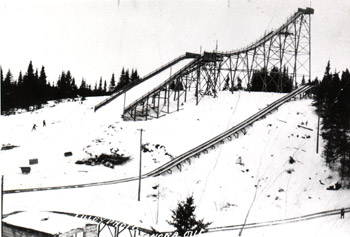