The Why of the Town’s Name Change

There is a local legend that Kenora changed its name from Rat Portage because a flour company didn’t want the word “rat” on their flour bag. I’m not convinced that’s the case. At least, I think there is more to the story. When you dig a little deeper into the name change it seems there was more at play than an uptight flour mill executive. There is a great article, Rat Portage Becomes Kenora, which covers the “how” of the town’s name change in depth, including some of the good, bad, and terrible name suggestions. It is a partner to this piece and gives a play-by-play of how the name was changed. In this piece I’m less interested in the how and more interested in digging into the why.

The origin of the name Rat Portage is fairly straight forward. The portage from the north end of the Lake of the Woods to the Winnipeg River was named Wauzhushk Onigum by the Anishinaabe, which loosely translated meant “carrying place to the muskrat country.” This became “portage du rat” to the French, and “the rat portage” to English speakers.  When the Hudson Bay Company established a permanent location the post was called the Rat Portage House. The town had been officially known as Rat Portage since the establishment of the first local post office in 1879. Public discussions about a name change began as early as 1882, and continued in 1887 – 1892.

At a town council meeting in February 1902, the subject of changing the name of Rat Portage was raised again, this time by the Board of Trade. The members recommended changing the name from Rat Portage to Kenora. They believed it would increase business and tourism. The delegation was led by George Drewry, a local business man and tourism booster.

At the next regular council meeting a week later, despite support from Mayor D.C. Cameron, the name change was voted down. Councillors A.S. Horswill and C.W. Chadwick— the champions of the change at the meeting prior— were not in attendance. 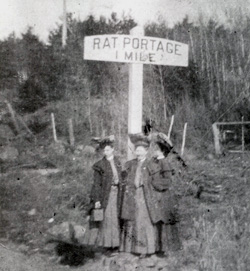 On February 19th, 1902, only a week after the attempted name change, a delegation from Rat Portage that included Mayor D.C. Cameron and George Drewry met with Canadian Pacific Railway (CPR) President Sir Thomas Shaughnnessy in Montreal. The CPR was rumoured to be looking for a community in which to build a hotel in central Canada. The largest tourist hotel in Rat Portage, the Hilliard House, had burned down a month before. The delegation pitched Rat Portage as a new location for a CPR hotel based on the model of Banff Springs and Lake Louise. Perhaps Mayor Cameron and the Board of Trade was trying to change the name of Rat Portage as part of their pitch to Sir Thomas?

Sir Thomas Shaughnessy and CPR executives visited Rat Portage in June 1902, and were hosted by George Drewry and Mayor Cameron. The stay was short and involved a tour of the town and dinner. Sir Thomas agreed that the lake was beautiful and that a hotel overlooking the bay would attract many tourists. The Rat Portagers were no doubt thrilled. 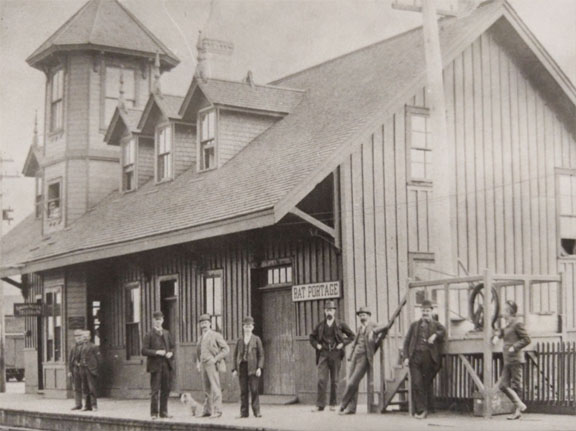 The next day the CPR executives headed west for Winnipeg. Less than a week later Sir Thomas announced that he would support building a grand CPR hotel in Winnipeg. That hotel, The Royal Alexandra, would be built on Main Street by the new CPR station. It was reported that Sir Thomas was quite impressed by the modern progress in Winnipeg. Despite the tourism potential and natural beauty of the Lake of the Woods, Rat Portage could not compete. The town lacked proper sewers and instead relied on open ground level cess pools. This, combined with approximately 200 head of livestock living downtown, meant Rat Portage in 1902 was not an appealing place to invest in a luxury hotel.

In the election of 1904 (municipal elections were yearly at the time) the mayor’s seat was contested by A.S. Horswill and W.G. Cameron. You may recall, A.S. Horswill, along with D.C. Cameron and George Drewry, was a champion of changing the town’s name. The candidates’ platforms were polar opposites —  W.G. Cameron was the austerity candidate. He intended to keep taxes low and public expenditures to a minimum. A.S. Horswill was the progress candidate, promising to dig sewers, build and fix sidewalks, build a walking bridge over the CPR tracks, and attract investors.

When election day results came it was a resounding victory for A.S. Horswill.  It was a shock because both candidates were quite popular, and many expected a close race. Instead Horswill sailed to victory with over 60% of the vote.

Through 1904, Council got to work approving sewer plans and repairing bridges. Additionally they lobbied the new Grand Trunk Pacific Railway (aka CN) to build a stop in town. Finally they began negotiating with Maple Leaf Milling Company to open a flour mill in town, a deal that was contingent on the town’s ability to sell them power at a set rate, give them a break on taxes, and provide other perks. Mayor Horswill’s promise to invest in progress was certainly being fulfilled.

In September of 1904, Rat Portage was again visited by CPR President Sir Thomas Shaughnessy and his executives. Again they toured around town, commented on the beauty of the lake, and how the town needed a grand hotel, but declined to support building a CPR hotel. A week later the executives of the Grand Trunk Pacific, led by President Charles Melville Hays, visited and made similar claims.

About a month after those VIPs visited, in October 1904, Council voted in favour of changing the name of Rat Portage. One week later, at a special meeting, several names were discussed. After going over the pros and cons of several names it was agreed that Kenora was the choice. Mayor Horswill moved, and was seconded by councillor Angus Carmichael, that the name “Kenora” be the new name of the town.

Many were angry at the change and a flood of letters were sent to the newspaper. The letters opposing the name change generally appealed to history and tradition as the reason to forgo the change. One letter to the editor in particular makes a interesting accusation—  it reads in part:

“…Because a financial magnate comes along and the term “Rat” shocks his sensitive nerves and says, ‘your town smells bad’ and ‘change your name, and it will be easier for you to get your bills discounted and to sell debentures’ what twaddle!

…The Grand Trunk Pacific directors do not go… on sentiment.  If it is in their interest they will divert their line to touch this place and that is irrespective of whether it is called Rat Portage or Pinkrosia.”

That appears to be an accusation that the Mayor and Council had been influenced to change the name of Rat Portage, at least in part, by a visiting VIP. Yes, that might have been a flour executive, but I think it was either Sir Thomas of the CPR or Charles Melville Hays of the Grand Trunk Pacific. Perhaps they both made similar suggestions.

In the 1905 mayoral election the question of the name change was up to a vote. Not directly, but in the form of choices of candidates— Mayor Horswill favoured a name change and continuing his programme of building sewers and sidewalks. His opponent, former mayor William McCarthy also favoured infrastructure but also wanted to put the matter of the name change to a plebiscite.

In the election Mayor Horswill crushed McCarthy, winning over 66% of the vote. That didn’t settle the name matter and in the first four months of 1905 there were more wild meetings about the name change. Tempers ran hot, but Mayor Horswill stood firm. The name change was legal and final and no plebiscite would be held. 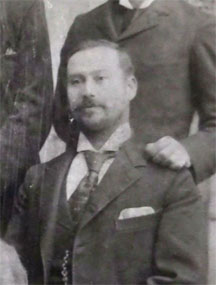 While Mayor Horswill successfully changed the name of town, his time in office wasn’t all successes. The lobbying effort to bring the Grand Trunk Pacific Railway to Kenora failed. The negotiations with the Maple Leaf Flour Company nearly failed, but were saved and signed in October 1905. It is worth noting that Mayor Horswill, a champion of changing the name from Rat Portage to Kenora, voted against the final flour mill deal in a split Council vote. If the name of the town was changed to assuage the Maple Leaf Flour Company you would think the person who was the driving force behind the name change would have supported the final deal, especially since a majority of Council members approved.

We will never know the absolute truth of the story behind the name change in Kenora, but in life the most simple answer is usually the correct one. The desire to change the name of Rat Portage only grew between the 1880s and 1905 when it was finalized.  Was it a word from a VIP the last straw that caused the name change? It sure seems that way. What we do know for sure is that the name was changed because people believed they were acting in the best interest of the community. And while there was still lots of work to be done, the attitude behind changing the town’s name helped mark a local shift that set the tone of the new century, and it is something that echoes even today.

← Central School Reminiscences Keewatin and the Deconstruction of J.S. Woodsworth →