In 2010, exactly 100 years from the date that the contract was awarded for the construction of the Tourist Hotel (as it was originally known), the historic Kenora landmark was being considered for heritage designation by the Kenora City Council. On the recommendation of the Municipal Heritage Committee, Heritage Kenora, Council has made known their intention to designate this fine building which represents for the community one of its earliest efforts in attracting tourists to the town. As well, the architecture of the building, while having undergone some changes over its 100-year history, is noted in being Northern Ontario¹s best example of a Beaux-Arts influenced hotel.

Designation is based on the cultural heritage value of the property and there are three main criteria: historical/associative value; design/physical value; and contextual value. A property need have only one value in order to qualify for designation. In the case of the Kenricia Hotel, there is a strong case for its designation based on all three values. 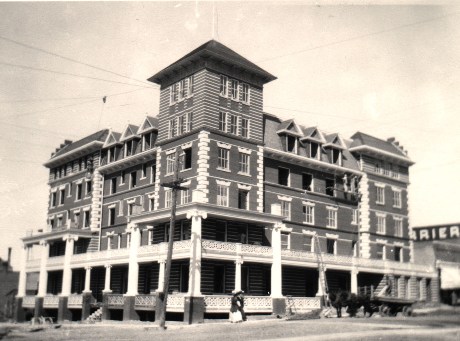 From a historical point of view, the hotel is the cornerstone of the town¹s efforts to promote itself as a tourist destination. In 1903, there was a report in the local newspaper announcing that a group of local citizens,among them D.C. Cameron (later Lieutenant Governor of Manitoba) and George Drewry (a local businessman), had purchased the site of the former Hilliard House and Queen¹s Hotel, both of which had burned in 1902. The group intended to build a first class hotel. As noted in the local newspaper, instead of waiting for a larger corporation like the CPR to build accommodations for visitors to the town, the citizens, “with commendable foresight and civic loyalty, have gone ahead with plans for a building of their own.”

In 1907, Chicago architect Frank Newell was hired to design a hotel befitting the burgeoning tourist town.

The Beaux-Arts style that Newell followed in designing the building was, in many ways, a reaction to Victorian frivolity and a return to classical traditions. The style is characterized by several design details:

In the spring of that year, the contract for the construction was awarded to Carter, Hall, Aldinger and Company of Winnipeg, Manitoba. The accepted price was $225,000. Construction began immediately.

The hotel was built of Wisconsin brick and limestone from Tyndall, Manitoba, on the main corner of downtown Kenora Main and Second Streets South. The original blueprint showed the Main Street wing to be exactly twice the size of the eventual construction. Financial difficulties, which plagued the project over its three-year construction, dictated some adjustments to the plan. In the end, only half the wing was built. While it was hoped that the hotel would open in 1908, delays, most finance-related, prevented the completion of the hotel until 1910. It officially opened for business on August 20, 1910.

The Kenricia Hotel is one of Kenora¹s landmark buildings. While it has simple lines and proportions, it also has a pronounced presence in the downtown. It surpasses in height and presence any other landmark building in town and is visually prominent no matter which way one enters the town – by water, road, or rail.

It is strategically placed at the centre of the downtown, at Kenora¹s most important retail intersection.

← A Cornerstone of History: The Doner Block The New Thistle Rink →