The Ballad of Sundin’s Scorpions

Ninety years ago a hockey team from the depression relief highway construction camps electrified local crowds with a mix of rough-and-tumble hockey and pro-wrestling-style panache. Using the local paper as their microphone, they challenged all comers, mocked their rivals, boasted of their victories and, for a brief moment, helped create a hockey league that was more at home in the wrestling ring than at the rink.

After the market crash in 1929 the world tumbled into the Great Depression. Thousands were out of work, and the crisis continued to worsen through 1930 and into 1931. In mid 1931 the Province of Ontario announced that they would sponsor the building of the Trans-Canada highway from Ignace and the Manitoba border as a relief work project.

To build the highway they would need workers. In addition to hundreds of locals, over 3,500 unemployed men were sent from across Ontario for the project. There was a work camp about every ten miles — 16 in total. Most of the workers arrived in late fall for the winter’s work.

The work was hard, and the men faced long days cutting and blasting their way through the shield. But, they had their evenings free, so immediately the camps began forming social committees, radio clubs and, most importantly, hockey teams complete with their own pond rinks.

In the Kenora Miner and News on December 30th, 1931 there was a letter to the editor that served as a challenge, or perhaps a warning, to all the hockey teams in the highway camps—

We, Sundin’s Scorpions, challenge any hockey team on the Trans-Canada Highway, or in Kenora, or in the world, to a game or series of games of hockey, any time, any place, for fun or money or for a milk fund.

We do not use a goal tender and will donate a bed in the charity ward of any hospital to any opposing player unfortunate enough to get past centre ice.

While at first glance, it might look like those are hockey sticks in the hands of these highway construction workers, they’re more fittingly axes. This crew, at an unidentified work camp, pose in front of their tar paper shack which they have cheekily named “Ma Ain Wee Hoose,” A lucky horseshoe is hanging on the door. 1931.

Sundin was the camp supervisor of Camp 1-F-13. Like military units in the First World War, the men had taken on the name of their intrepid leader for their team. As these things often do, what likely started as a way to find a team to scrimmage with got a little out of hand. The challenge reads like the work of a few guys sitting around after dinner trying to make each other laugh. But, hey, they were bored and they wanted someone to play against. Why not spice it up a bit?

In response, other camps formed teams and, using the pages of the Miner and News, accepted the Scorpion’s challenge. Like this one from Lajeunesse’s Porcupines—

Had the Scorpion’s… only challenged the Montreal Canadians or some other minor team their challenge might have passed unnoticed, but when they issued an ultimatum that they would “lick” the world they covered a little too much territory and stepped on [our] toes…

Scorpions… consider the chip knocked off your shoulders and at that date… we ‘Lajeunesse’s Porcupines’ will give you, free of charge, a valuable lesson in hockey.

Another Team, The Hawks (of Hawk Lake Camp), wrote—

We, the Hawks, knowing there is still plenty of room left in the Lake of the Woods Cemetery for players who try to get hospitable with us, accept your challenge and call your bluff…

Under the assumed name of “Joe Beef”, the “press agent” of the Scorpions, responded to the challenges, writing—

It seems, Mr. Editor, that everybody in the world has a hockey team of their own, and want to beat us as we have writers cramps from answering all the challenges, including the Black Ox in Chicago, and our wives, but this was to be expected…

The Scorpion’s first game was against their neighbouring camp 1-F-14, aka Peterson’s Cosmos. The coverage of the game was provided to the newspaper by the Scorpions’ press agent,  Mr. “Joe Beef.” With flair and panache that would make a carnival barker blush, Beef described the Scorpions taking the ice—

The Scorpions took the ice first in their new pink and yellow sweaters… with a black scorpion and cross bones in the centre. [prior to the game] “Pig Iron” Constable held the puck aloft and called on all the Cosmos to take a good look at it as they would not see it again till after the game.

“Pig Iron” Constable was the nickname of a Scorpions winger. All of the Scorpions players were given garish nicknames, including the aformentioned “Pig Iron” Constable, then there was “Gutter” Stillin, “Sly” Faux, “Banshee” Fisher, “Carver” McCabe, and their goalie, “Four Eyed” Morland. The write-up for the game is quite amusing. Joe Beef’s tongue-in-cheek comedy and outlandish style caught the attention of the contemporary readers of the Miner and News and the Scorpions became an overnight hit.

To be clear— these games were being played on ponds and swamps in the middle of the woods for the amusement of the other men at the camp. So, the exaggerated write-ups really got people in town talking. Readers in Kenora loved these pro-wrestling style reports of the games. Soon other teams were submitting their own off the wall reports of games. In mid January at Camp 1-F-8, the renamed Wildcats (of Hawk Lake Camp 1-F-8) defeated the Tigers in preparation for their matchup with the Scorpions. The Wildcats’ dispatch was written by a parody of the Scorpions agent Joe Beef, in this case it was “Bill Pork”—

The game finally got under way to the musical note created by the referee’s bell (a soup ladle and pie plate). The teams immediately made a rush for the cook house, mistaking the signal to start the game for the dinner gong…

The game ended with the Wildcats gathering at centre ice and snarling their hymns of hate. Come on you Scorpions. The tougher you are the deeper we scratch.

– Bill Pork, on behalf of the Hawk Lake Wildcats 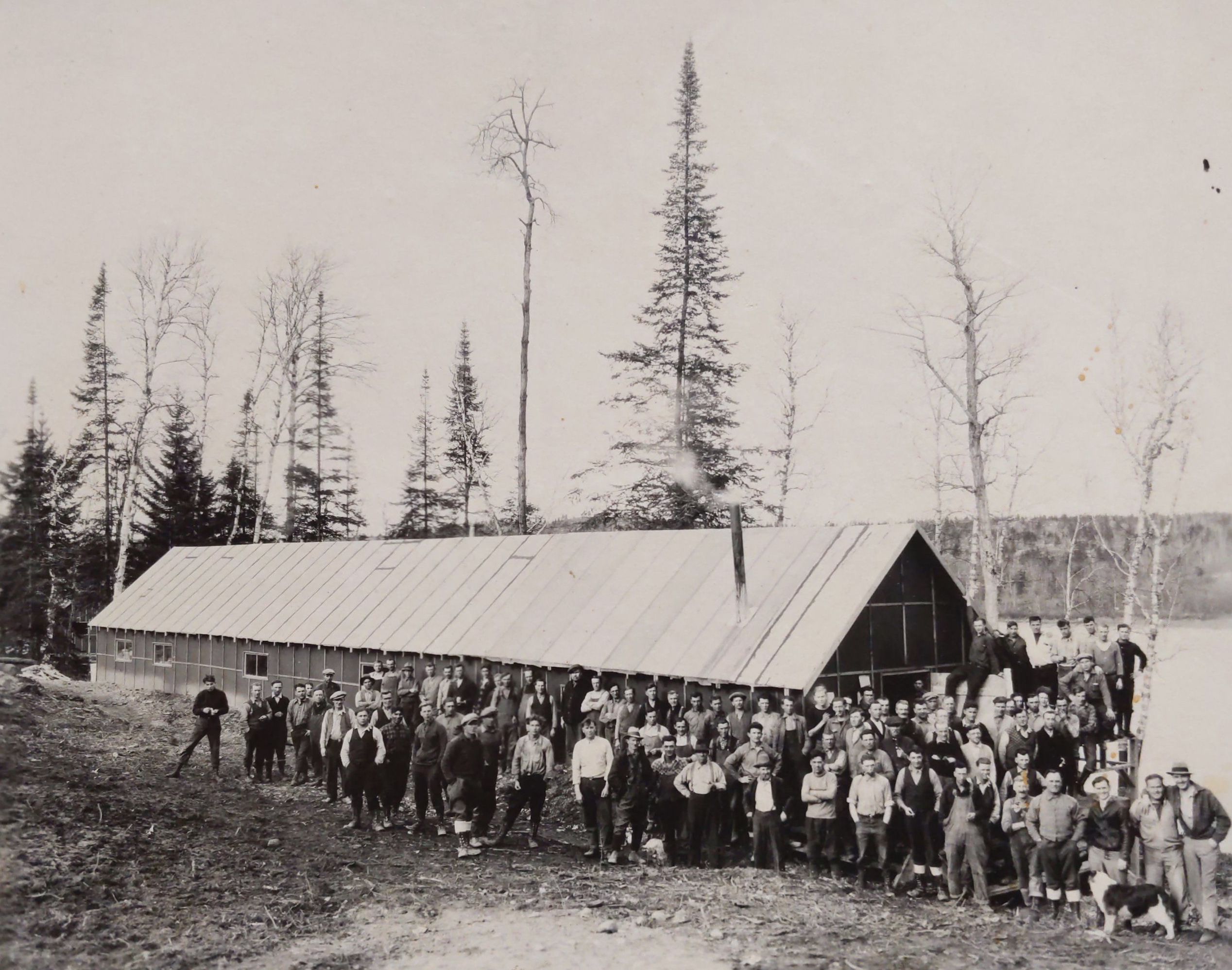 By the end of January the Scorpions had been handed their first loss by Benson’s Knights of the Forest (of Birch Lake Camp). Joe Beef once again gave an emphatic dispatch claiming that the Scorpions goalie, “Four Eyes” Morland, was so distraught that he was “on a hunger strike  between meals” and would “only be taking hot soup and food as his only diet.” The Scorpions did take solace in that even in defeat it was the finest hockey around, writing, “Wasn’t it the finest piece of hockey staged on the Frigidaire since Rat Portage was Mouse Runway? We’ll say it was, and hockeyetically speaking do we know what we’re talking about?”

The bombastic reports of the highway camp league games were front-page news in Kenora, and were often featured above the reports of the Kenora Sr. Thistles games. By the end of January the Scorpions were invited to play an exhibition game at Thistle Rink as part of the local Ice Carnival. By this time the Scorpions had a mixed record of wins and losses, but nevertheless declared themselves to be World Champions—

We will be at the Kenora Rink on Friday the 5th against some worthy team or collection of teams, and the people of Kenora may consider themselves very fortunate as the Kenora Citizens Band have arranged for you to get a look at your Champeens [sic] in action. Get your tickets early, and if you can’t get in, shove your money under the door.

Sundin’s Scorpions played an exhibition against a team called the Dandylions, which was made up of office staff supporting the highway project. A capacity crowd at the Thistle Rink saw the Scorpions defeat the Dandylions 3-1.

The first games would be played at the respective camps, with the final played in Kenora at the Thistle Rink on March 5th, 1932.

In the first round Sundin’s Scorpions took out Garrow’s Bulldogs, and moved on to play Peterson’s Aces. While prepping for the Aces, however, the men of Sundin’s camp 1-F-13 were surprised when they received a package from San Antonio, Texas. It was from Kenora summer resident E.C. Anderson, and inside was a real scorpion.  Anderson had been following the drama from his home in Texas, and decided the Scorpions needed a mascot.

With their new mascot placed in a “gold plated coffin” the Scorpions defeated Peterson’s Aces the next week to advance to the semi-final. They met Lajeunesse’s Porcupines in the semi-final. The game was a bust for the Scorpions, but afterward it came to light that the Porcupines had played a ringer who did not work at their camp! According to the tournament rules, the Porcupines were eliminated. Sundin’s Scorpions were awarded the victory and advanced to play Heino’s War Eagles (of War Eagle Lake Camp) at the Thistle Rink on Saturday, March 5th.

Hundreds packed into the Thistle Rink to see the self-proclaimed world famous Sundin’s Scorpions take on Heino’s War Eagles. The game was a close affair with both goalies putting on a clinic, turning back shot after shot. Despite George “Pig Iron” Constable’s best efforts, the Scorpions could not find the back of the net. The self-proclaimed “World Champeen” Scorpions lost to the War Eagles 1-0.

Heino’s War Eagles were the inaugural and final champions of the Highway Camp Hockey League.

In the coming weeks there were a few more exhibition games, but Sundin’s Scorpions had played their last. The new Trans-Canada Highway was completed that spring and, with that, the highway camps were disbanded, including Camp 1-F-13 aka Sundin’s Scorpions. However, the camp was not disbanded before they received one more package from an anonymous source in San Antonio. This time it was a scorpion that was still very much alive and very upset to have been sent to Canada. Apparently the famous Texas newspaperman Jim Davis had written about Sundin’s Scorpions in his newspaper column, which had also been picked up by several Mexican papers across the border. The team was literally an international hit. After the shock wore off, the men at 1-F-13 scrounged up some flies for their new star mascot to eat, and it became the guest of honour at camp parties for the rest of the spring.

On Victoria Day Weekend, 1932, the highway unofficially opened to the public. In that first weekend alone more than 500 cars came to Kenora for a visit. This was transformative for the tourism industry in the area, and was reported on widely in the local press, including by the newest columnist of the Miner and News— Joe Beef in his column entitled, Highway Bullywho. 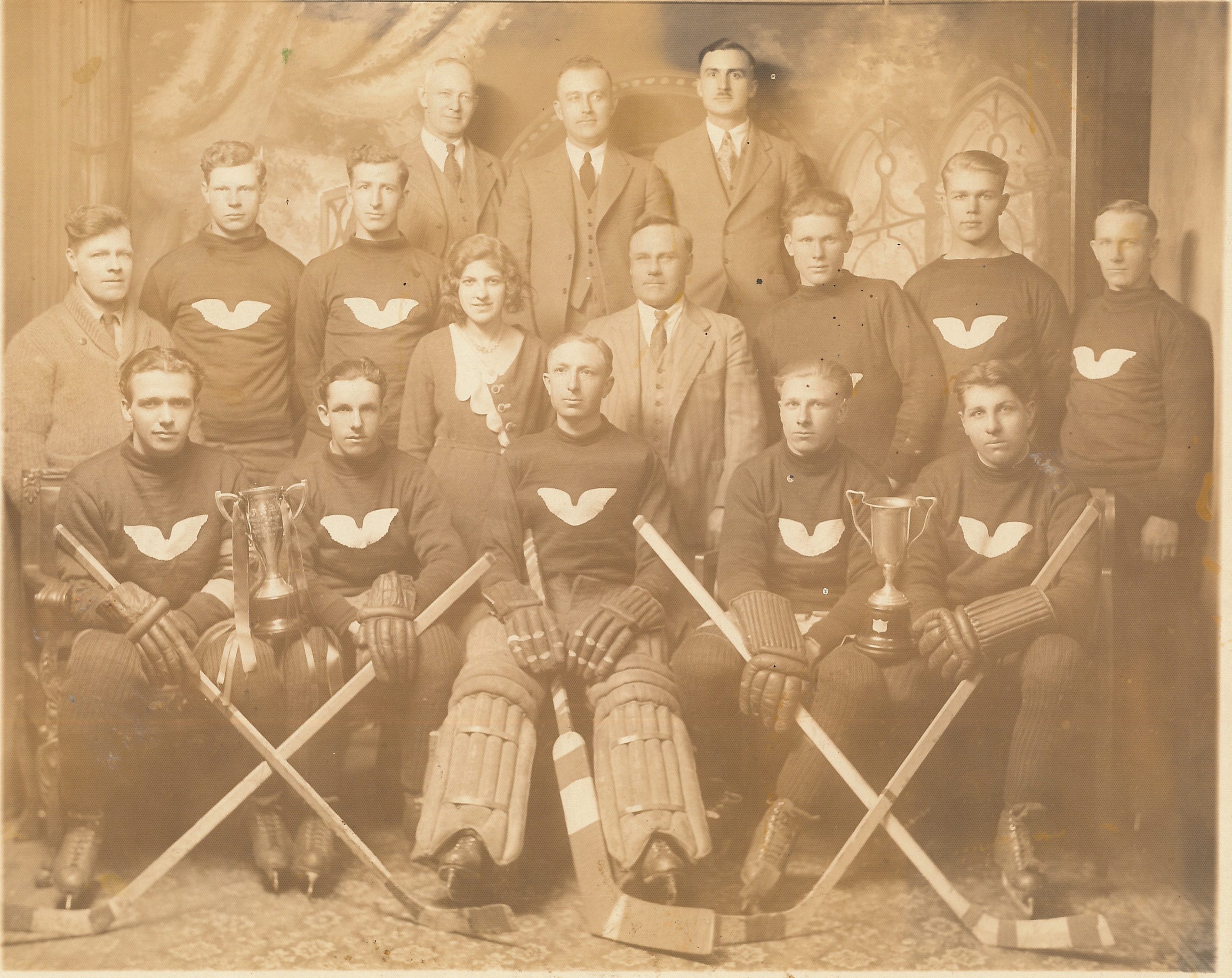 What started with a brash challenge to all comers had turned into a 16 team league complete with fans and a real trophy in a matter of weeks. The hoopla and bravado was just that, of course, and there were no actual hard feelings among the teams. These were men in lonely and difficult circumstances that were making their own fun. But the pro-wrestling style tom foolery caught on, and in their attempt to play the villainous heel, Sundin’s Scorpions brought everyone else along for a fun ride in that otherwise bleak winter of 1932.