Anglican Summer Camp Island is located south of Crowe Island at the mouth of Keewatin Channel on Lake of the Woods. Situated approximately five kilometres south of Kenora, the island has produced memories of a lifetime for two families, the O’Gradys and the Thompsons, as well as for many others who spent time on the island.

One of the first owners, John O’Grady, was a bank executive from the Ottawa area. He and his wife, Katherine, who was originally from Ireland, met and later married when she relocated to Ottawa. The couple eventually moved to Winnipeg, Manitoba into a 21-room house where they raised their three daughters and seven sons.

In 1910, Mr. O’Grady purchased the 60-acre island on Lake of the Woods from its Kenora owner for $5,000. The family fell in love with the lake and their island.

Colonel O’Grady decided they would build their camp high on a hill on the west end of the island, facing west so that they would be able to view the beautiful sunsets. They manually hauled enormous logs up the hill to build the main cabin where the family slept, cooked and lived. In addition there was a beautiful two-storey boathouse built. The bottom level was for the storage of their watercraft and the upper level was another place for accommodations. They called their camp Knock-Na-Cree, a Gaelic term meaning “Hill o’ My Heart”. 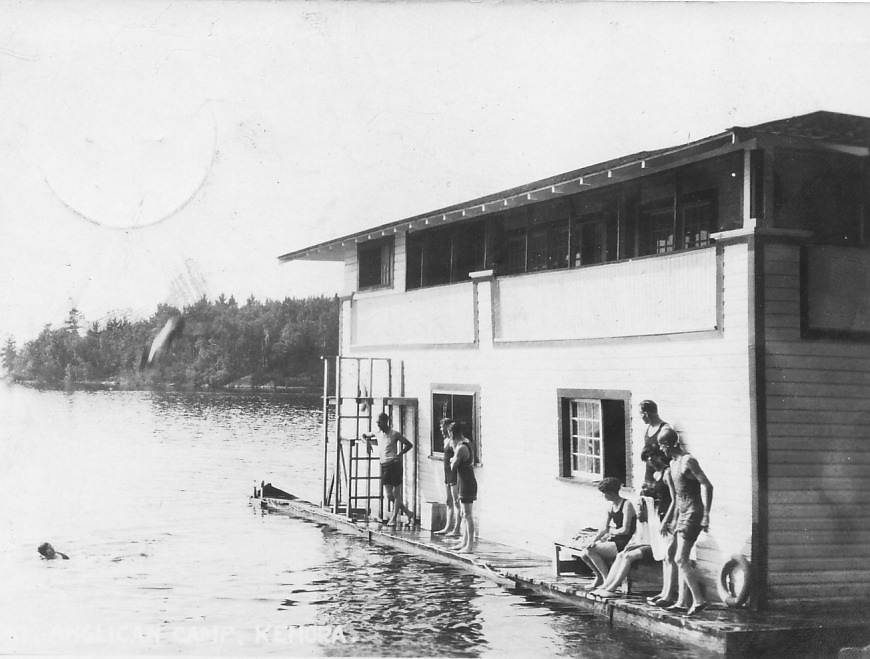 Anna O’Grady, one of the daughters, recalled the efforts made to furnish the camp high on the hill:

…we practically stripped that house (their house in Winnipeg) of excess furniture with which to furnish the island home, and still had plenty left. This was shipped to Keewatin, loaded on an open scow and dumped on the rocks at waters edge on the point of the island in the channel – quite a distance from the house, and we youngsters…put our shoulders to the task of getting the furniture up the hill and away from the waters edge in case of a storm.

Refrigerators, double bedsteads, sofas and large chairs presented quite a problem, but then none of it was easy as no underbrushing had ever been attempted on the island; there was not a sign of a path anywhere, and our backs and arms were not trained to the task. 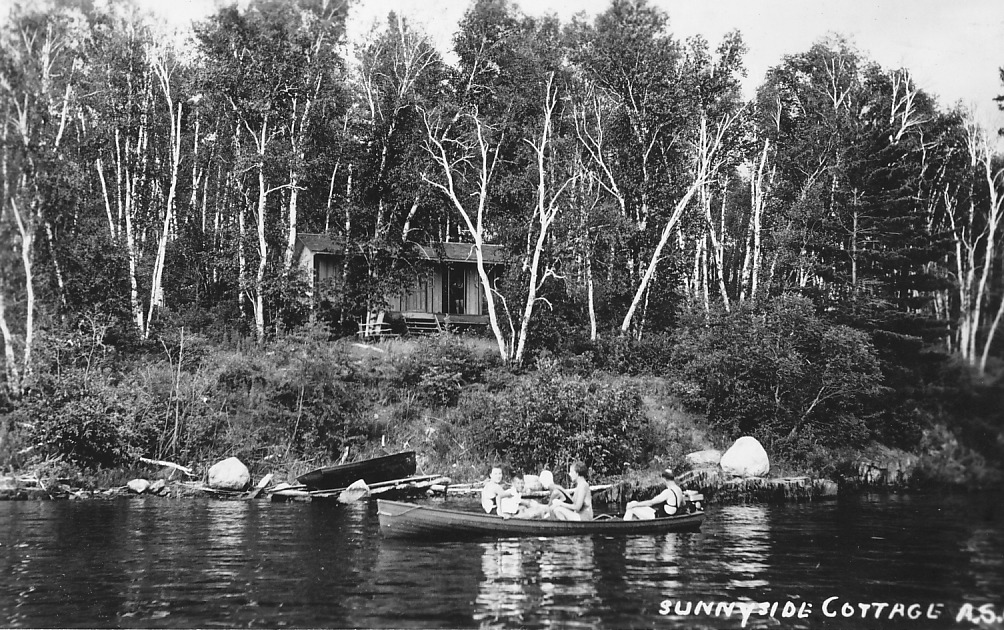 During the summer, the family often had more than 20 people visit their little oasis on the weekends. It was a challenge living on the island with no electricity and a lack of plumbing. They had to rely on drawing water from the lake and of course, using the outhouse.

The O’Grady family enjoyed the camp until World War I started in 1914. Anna O’Grady remembers her father coming to the island one weekend and announcing that the country was at war. The family was told to pack up. The Colonel moved them back to their home in Winnipeg. This was a way of keeping everyone safe while the men set off to war. Unfortunately that was the last time the O’Grady family saw Knock-Na-Cree, the island home that they had fallen in love with.

Many of the men in the O’Grady family enlisted, including Colonel O’Grady. Sadly he fell sick, had a stroke and died in November of 1914. Katherine, his wife, was left with the property of Knock-Na-Cree.

Frank W. Thompson, who married Mabel in 1900, worked long, hard days on the railroad. He was continuously relocated to different cities around Canada until 1912 when he was placed permanently in Winnipeg, Manitoba. Finally the Thompson family had a chance to enjoy a specific area. Frank, at the invitation of a fellow railroader, Arthur Frith, brought his family on a camping trip to Lake of the Woods in 1913. He fell in love with the lake and the following summer he and his family set up their tent alongside the Frith cottage once again. However, the onset of the war put an end to the camping.

During this time Frank Thompson became a Scout Leader at St. James Anglican Church. The family was involved with both St. James and St. Matthews. When World War I ended, the Rector at St. Matthews, Archdeacon McElheran, saw how disheartened some of the returning soldiers were with no employment and limited future prospects. He thought that a summer camp that catered to those with limited financial resources would be just the thing. Frank and Mabel Thompson played an active part in getting the camp started.

Originally the camp consisted of canvas tents and was held one summer on Lake Winnipeg and then on Lake of the Woods.

In 1923 it was learned that the cottage of Colonel O’Grady and his family was sitting vacant. At this time, there was an existing lodge, boathouse and a small boat called Mavoureen (“my darling” in Gaelic). Several summer camps were held on the island using the buildings and multiple canvas tents. So successful were the camps that in 1931 the island was purchased for $7,000 from Katherine O’Grady by the Anglican Diocese of Rupertsland with money raised by the Women’s Auxiliary.

Upgrades to the camp followed with the erection of semi-permanent tents, the purchase of a larger launch called the Anglicana II, the development of several beaches and the addition of canoes and rowboats.

Summer camps on the island were open to everyone, not just Anglicans. The camps accommodated about 60 people and 10 staff. Some of the activities that were enjoyed on the island included campfires, sing-alongs, boat races, fishing derbies, and swimming. Later a golf course was added, as well as multiple nature trails and a tennis court. Frank Thompson oversaw the operation of the camp for many years even though he and Mabel owned their own island. It was in close proximity to the Anglican Summer Camp, and was called Onawee, as in “on a wee island.” Frank died at age 65 in 1938 but Mabel continued to enjoy summers at Onawee until her death in 1954.

In the 1950s the Anglican Summer Camp Island also became home to Camp Wapatek which was geared towards children between the ages of seven and 15. It closed in 2000. 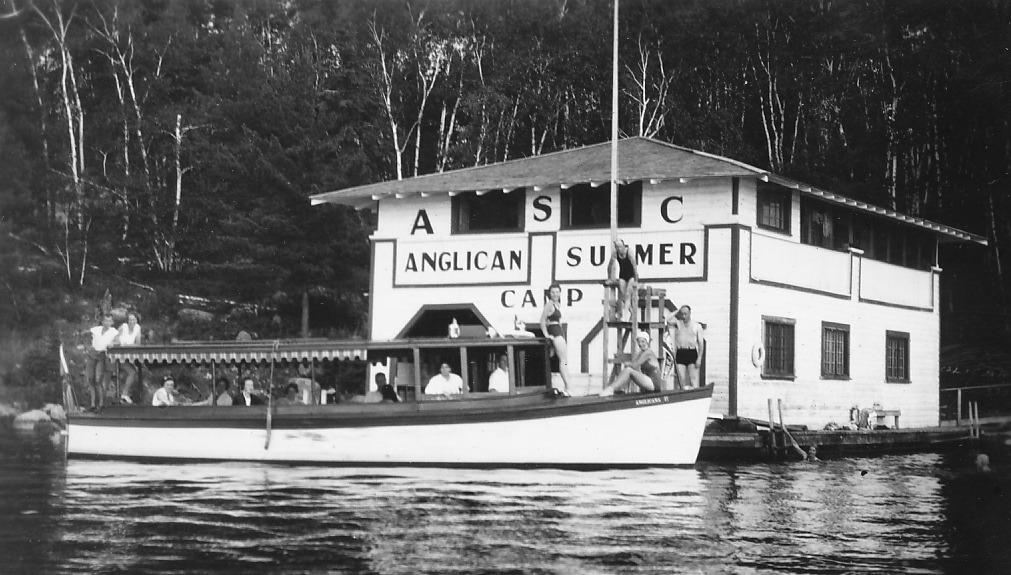 In February 2002, the Diocese sold the property for approximately $1.2 million. The new owner rented out the family cabins to whoever was interested in spending some time on the lake. The cabins were basic, with no electricity or plumbing. There was a central washroom and shower facilities and campers could use the large kitchen in the lodge building.

The camp eventually became the “Oneida Rustic Lakeside Resort”. The remaining cabins from Camp Wapatek are still standing along with family cabins that were built along the lakeside.

This island has played an important role in the history of the Rat Portage/Kenora area. It has served as a summer retreat to many.