Summer at the Drive-In

The Drive-In Theatre — few places evoke such strong memories of summer evenings spent with family and friends. The Rabbit Lake Drive-In opened 65 years ago, at the height of Hollywood’s Golden Age. For those lucky enough to have experienced it, the drive-in was a place where the silver screen and the smell of popcorn met beach towels, bug spray, and barbecue. A place where children in their pyjamas could see the latest cartoon spectacle from the roofs of their parents’ cars. A place where teens could hang out, free from the pressures of home and school. A place where fans of horror flicks and creature features could go for a moonlit scare on a Sunday night.

The history of the Rabbit Lake Drive-In — its popularity, decline, and eventual sale — closely mirrored that of drive-in theatres across North America. The first drive-in opened in Camden, New Jersey. Auto-parts salesman Richard Hollingshead was inspired to build a custom theatre for vehicles, after screening a film for his mother who was, as the story goes, too large to fit in a standard theatre seat. Hollingshead saw potential in offering viewers the opportunity to enjoy films in the comfort of their own vehicles, and in 1933, he patented his idea, thus beginning a cinematic revolution.

While initially satisfying a niche interest, rapidly changing social, economic, and legal conditions soon created the perfect environment for the meteoric rise of drive-in theatres. In the 1940s, a series of high-profile court cases forced American movie studios to make it easier for independent and small theatres to acquire films. These newly affordable movies, combined with a wave of postwar suburbanization and the invention of in-car speakers for existing drive-ins, signalled the beginning of a new era. The drive-in concept proved immensely popular and theatres quickly spread across the United States and Canada, with more than 4,000 in operation by the late 1950s.

Back in Kenora, Bill McIntosh — accompanied by his father from Saskatchewan, and his sister from Alberta — proudly welcomed the public to his new drive-in theatre on July 18, 1953. Two full-page ads in the Miner and News were taken out on the 16th and 17th by construction and supply companies to offer their congratulations on the project’s completion, and a series of articles explained the drive-in concept to an eager readership.

Though the refreshment stand was not quite finished in time for the grand opening, a special preview the night before had drummed up local excitement. The theatre was described as having “easy vision, natural sound effects,” and “as picturesque a setting as will be found anywhere.” On the day of the opening, one helpful article instructed prospective guests on how best to enjoy the show — a family friendly screening of the swashbuckling adventure Raiders of the Seven Seas: 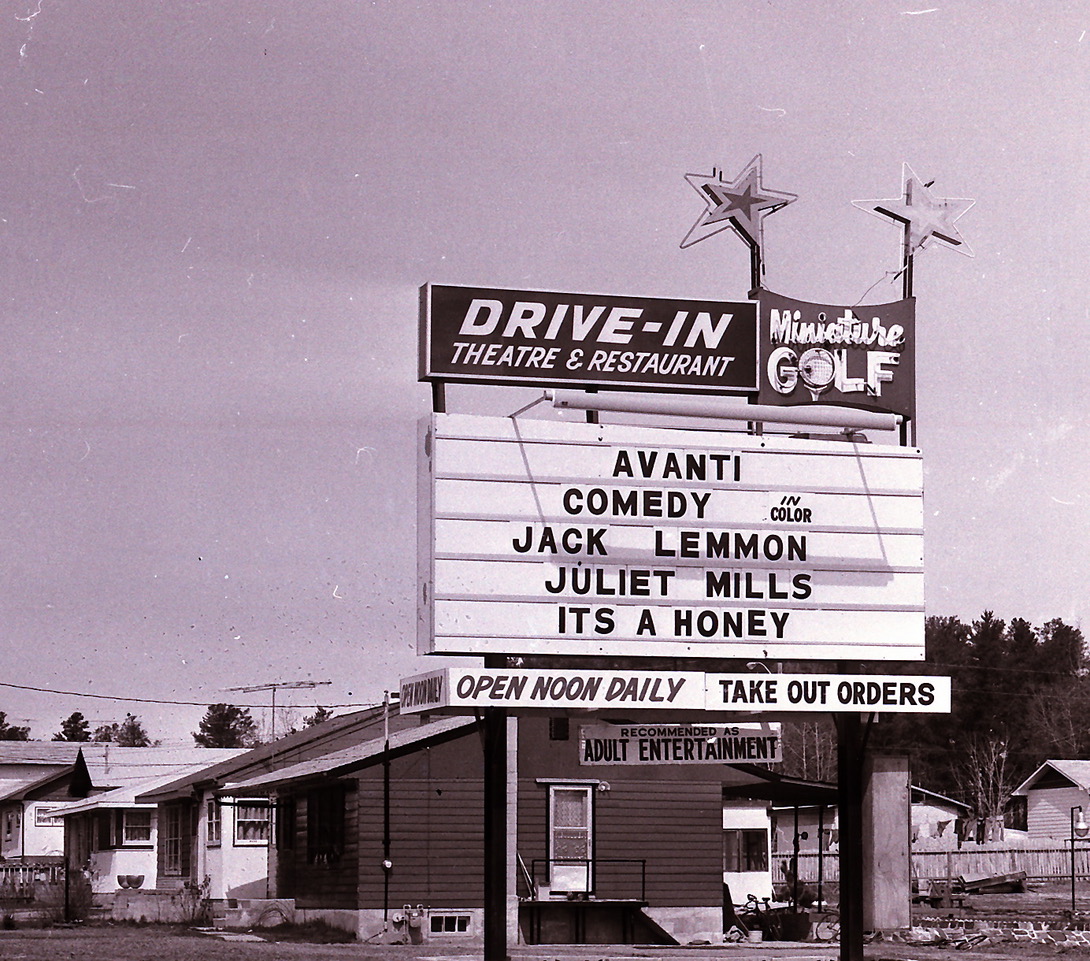 “Dim your lights as you enter. Drive up to either side of the lighted post which holds your speaker. The speaker is lifted off the post and fits over the glass of the car window. Don’t forget to replace the speaker as you leave, or you may pull out a window!”

As with many such theatres, the drive-in was built on what was, when it opened, the outskirts of town. Its 15 acre lot could accommodate up to 350 cars, and was ideally located near the booming Rabbit Lake. Only a few kilometres from the heart of Kenora, the lake’s popular public beach, with its shallow shore and warm water, was an accessible escape for the region’s residents and visitors. 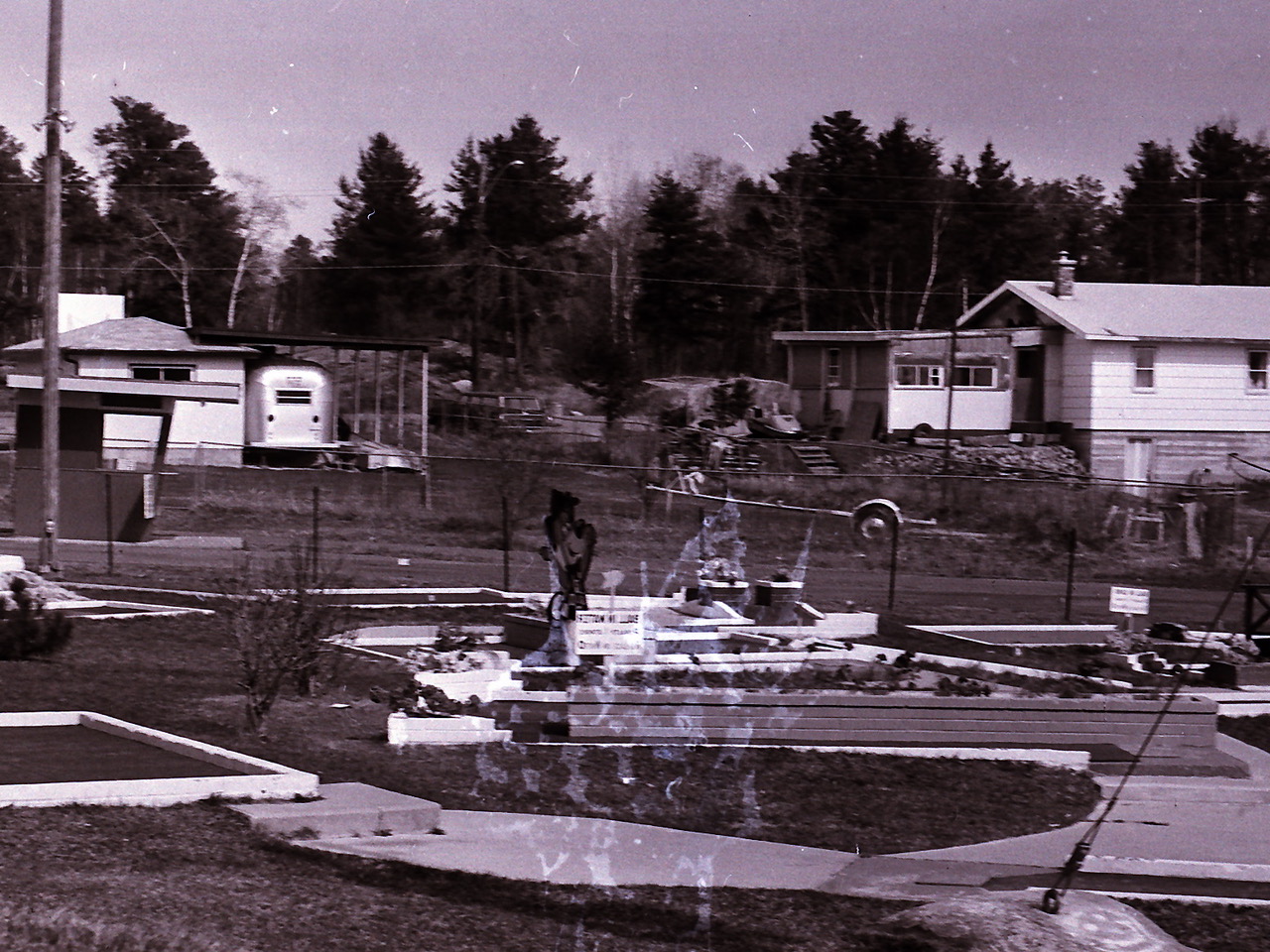 Until the 1930s, Rabbit Lake was mostly frequented by its farmers and homesteaders, with residents of the Rideout neighbourhood enjoying it as a recreation area. Residential development on the north shore began with construction of the road in 1932, and soon after, electric lights and telephone service started to appear. By the 1940s the lake was a summer hotspot. Several tourist camps, including The Pines, Edgewater Beach Camp, and Houghton’s Resort lined the lakeshore, and brought in guests from out of town. The drive-in added an entirely new element, and at the height of its popularity in the 1960s, included a restaurant, miniature golf course, and a family playground.

While drive-ins offered visitors a more comfortable viewing experience, among other benefits, there were serious challenges as well. In North America, especially in Canada, most outdoor theatres had (and still have) limited seasons, owing to cold winters. The Rabbit Lake Drive-In, for instance, began its yearly run at the end of April, and was often closed by mid-October. Add to this the late sunset during the peak summer months — an autumn or spring show might have started at 7:45, but by June, visitors would have to wait until 9:00 or 10:00 — and the narrow operating margin becomes apparent. This is to say nothing of the onslaught of mosquitos, and the dense haze of repellent that followed.