Local legend has it that the town’s name was changed from Rat Portage to Kenora because the Maple Leaf Milling Company was reluctant to establish a mill here if it meant having to put the word rat on their flour bags. Adding credence to the story is that when the milling company did build here in 1905, Rat Portage was no longer. The town’s new name was Kenora.

The officials of the milling company, however, were not the first to express their desire for a new town name. Dissatisfaction with the name Rat Portage had arisen years before and, at regular intervals, had been brought before the Town in consideration of more appealing appellations.

The name Rat Portage had its origin in the Ojibwa name Waszush Onigum, which roughly translated, means portage to the country of the muskrats. A shortened and somewhat corrupted version, Rat Portage, was adopted by the Hudson’s Bay Company in naming their post, then located on Old Fort Island on the Winnipeg River. When the post was moved to the mainland and a town grew up around it, the name Rat Portage was assumed by the community.

Rumblings of a name change were first heard at a public meeting in 1892. When the local newspaper put the question to its readers and encouraged people to submit their ballots, 103 people voted to retain the name, declaring that no better name than Rat Portage could be had. They were opposed by 173 people, who suggested possible alternatives. Sultana (the name of the largest gold mine on Lake of the Woods) garnered the most support, followed by Norman, and Sabaskong. Other suggestions included Island City, Island Park, Pequonga, and Lakeside. 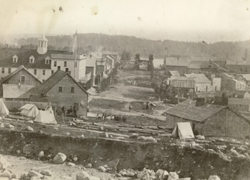 That same year, it was suggested that Keewatin, Norman, and Rat Portage amalgamate and be called Keewatin West, Centre, and East, respectively.

Threats issued by a respected old-timer in the community who wished to take a few rounds of the pencil pusher who’d advocated a name change in The News were indicative of the strong feelings associated with the issue. The discussion was dropped and Rat Portage remained.

Ten years later, in 1902, the town name was again an issue. Imperial, Portage Falls, Goldwater, and Kenora were presented for public approval. Another name, Tresilva, was put forth in a letter to the editor of the newspaper. It supposedly meant town of the woods and its advantage over the other names, wrote its advocate, was that it could be written easily from beginning to end without raising the pen from the paper.

In the end, none of the names were chosen. Rat Portage remained.

Then, in 1904, the matter was raised again, this time by the Town Council. It seems though that most residents only learned of it after a by-law to change the name received its first reading at an October Council meeting.

A week later, the name Kenora was chosen. Credited with inventing the name were Mrs. Matt Brown and Miss Ross, whose family connections were with the Ross, Hall, and Brown Lumber Company. The name was derived by combining the first two letters of Keewatin, Norman, and Rat Portage.

When the decision of the meeting was reported the next day, there was an uproar.

Letters to the editor were published on the front page of the Rat Portage Miner:

Another writer made his preference clear when he wrote: Rat Portage makes no pretense to flowery language; it takes us back to all the malodor of its origin, the dead muskrat found at the foot of our falls by Verendrye, LaSalle, and the other dainty Frenchmen, who had eyes to see and noses to appreciate. There is a peculiar charm in its honest, convincing prose; the old-timers with recollection lived, died, and are living and hoping to die true to Rat Portage.

A third writer questioned the wisdom of the decision since Rat Portage had made a name for itself on the international scene with its gold fields, spectacular scenery, and abundant water power. Who would know what we were about if we changed our name? And, the same writer must surely have provoked the neighbouring communities with the remark, And why should Keewatin and Norman be honoured at the expense of losing our town’s name?

Not content to let the name issue rest with the Council’s decision, a petition against the change was circulated and sent to the Lieutenant-Governor-in-Council in Toronto, whose sanction was required to make the name change official.

As townspeople expressed their disapproval through petitions and letter-writing, it became obvious the name change was going to be an issue in the municipal election to be held on January 2, 1905. The election, fortunately, in the minds of many, also held up the sanctioning process and allowed for more discussion, the call for a plebiscite, and the stirring of rancour against the Town Council.

When all the ballots were in and counted, Mayor Algernon S. Horswill was re-elected, as were three of the 1904 Councillors. Added to the slate were C.C. Delbridge, who was opposed to the name change, and William Robertson and W.W. Scott, whose position on the name issue seems to have been pro-change.

With the change of Council, the Lieutenant-Governor required a resolution from the new Council confirming the former’s resolution regarding the name change. A special Council meeting was held to pass such a resolution and it was passed. However, Alderman Delbridge, a proponent of retaining the town’s original name, claimed that he was never informed of the meeting. He did, in fact, hear about it… the next day. When this oversight was made public, questions were raised about the legality of the meeting. And that wasn’t all…

On April 10, 1905, a town meeting was held in the fire hall. Once again, indignation was expressed with the name change. People felt that they should have a direct say in such an important matter, and the way it had been handled by Council had not allowed for that.

When Mayor Horswill was asked to explain the actions of the previous Council in passing the name by-law, he explained quite calmly that they had been within their rights to do so, since they were the elected representatives of the people.

J.K. Brydon, longtime town clerk, stood and waxed eloquent on his love of the name Rat Portage, and even managed to work in some Scripture, which by and far confused people rather than elicited their support.

The town solicitor Mr. McLennan stated that the townspeople should have expressed their opinions long ago and then commended the Council for tackling an issue that they knew would draw much discussion.

While some in attendance expressed their approval of the name change, their beef was with the process. They wanted to put it to a vote.

The meeting ended with the following motion: Moved and seconded, that this meeting of the electors do respectfully request the municipal Council to defer further action as to the changing of the name of the town, and that the Council be requested to submit at an early date a plebiscite to the ratepayers on the following question: Are you in favour of changing the name of the Town of Rat Portage to such other name as the majority of ratepayers may see fit, and that the seven members of Council each select a name to be submitted to the people in such plebiscite.

A copy of the motion was to be sent to Toronto.

A copy of it was sent by town clerk D.H. Currie, but not before Currie had appended to it some remarks of his own remarks that could possibly bias the Lieutenant-Governor’s decision in favour of the name change. He intimated that the issue had been laid before the town at the last municipal election and that an alderman opposed to the name change was ousted in that election. Both statements were untrue and misleading.

What followed, however, was a recommendation from the Provincial Government that a vote be taken.

But Council was determined to see the matter through without the legal input of the ratepayers. A resolution, by Alderman Carmichael, seconded by Alderman Robertson, to drop the name change until a plebiscite was defeated in a Council meeting held on April 24th. 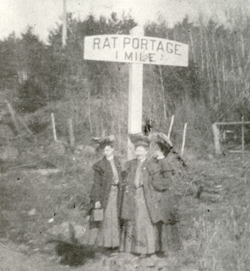 Despite its less appealing connotations, the name Rat Portage was favoured by many who opposed the name change to Kenora

Less than a month later, without the voter’s input, Kenora was officially declared the new name of the Town, by ratification of the Lieutenant-Governor. Still, town residents refused to let the issue lie. A large crowd assembled for yet another town meeting. The May 25th gathering was dubbed the big indignation meeting by the local press. At issue the fact that the Mayor and Councillors had been less than upfront in their dealings with the electorate on this issue.

Formally stated: Be it therefore resolved that the meeting of the ratepayers of Rat Portage do hereby express their indignation of the treatment accorded to their desires expressed at the public meeting held on April 10th last. And that this meeting desires it to be placed on record, that the changing of the name of Rat Portage to that of Kenora has been accomplished entirely against the will and wish of the majority of the ratepayers to the town and by representations to the Lieutenant-Governor that were misleading.

There was so much noise from the crowd that those who were slated to speak at the meeting were forced to keep their comments short. One outraged resident called for the Mayor’s resignation, saying he would run against him on the issue of the name change. He ended his rant by saying that the name Kenora was alright for a breakfast food, but not for a town!

The Mayor was allowed to defend the actions of himself and the Council and he did so with spirit. When he was finished, there was applause from all parts of the hall. In the end, Kenora remained.

The local press urged the people to accept the new name: That the name is changed is the one fact accomplished, we believe it to be in the best interests of the town for those who opposed the change to accept the situation gracefully, and shake hands with the advocates of change.

The writer adds, however, that we might have chosen a stronger sounding name.

← The Struggle for Daylight Savings Time Polio in Kenora →

In 1870 the Wolseley Expedition went through this area on route to the Red River Valley. Major General Garnet Wolseley got impatient and set out to cross the lake in a storm.  He got lost on the Lake of the Woods for two whole days!