Pack the Shovel: Four Frozen Swedes and the First Car Trip to Winnipeg

When I talk to Grade 6 classes about how Kenora has changed in the last 100 years I usually get to a part around the middle that sounds something like this:

Me: Have you ever driven to Winnipeg?

Me: Did you take the road?

Me: What would you do if there wasn’t a road? 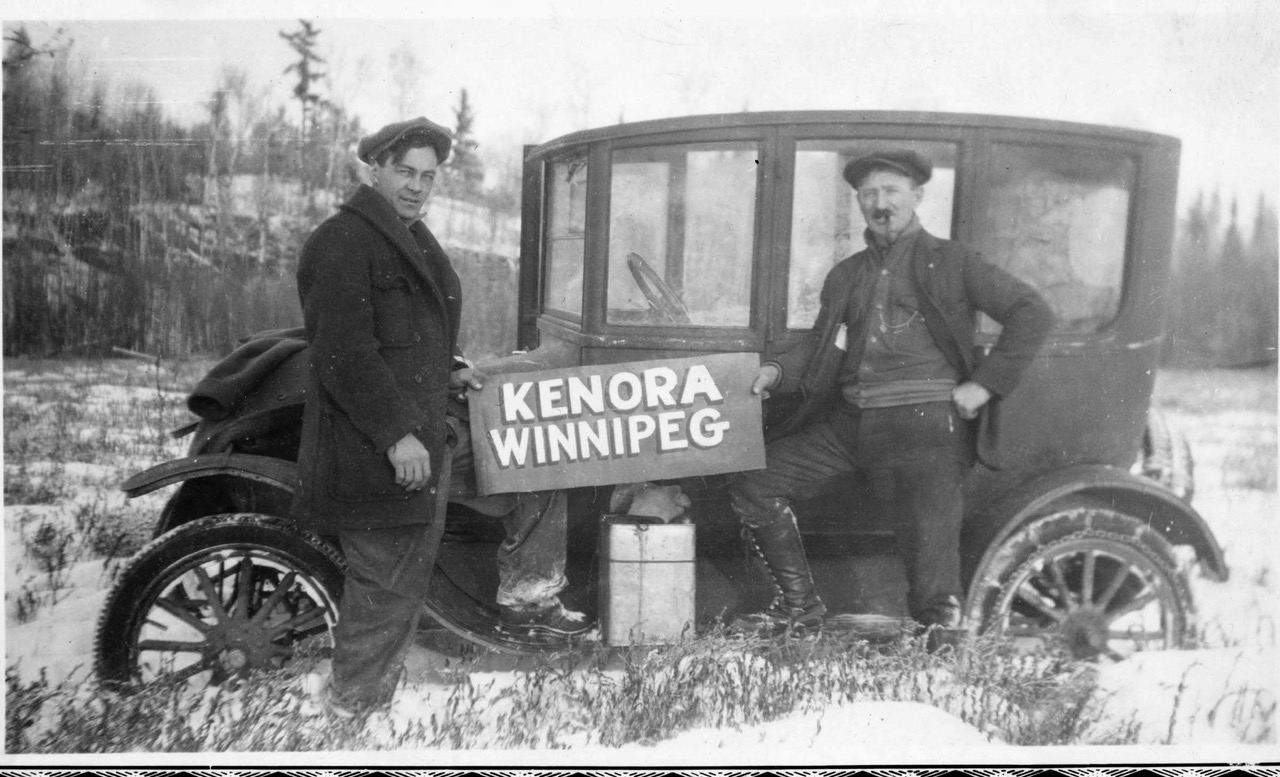 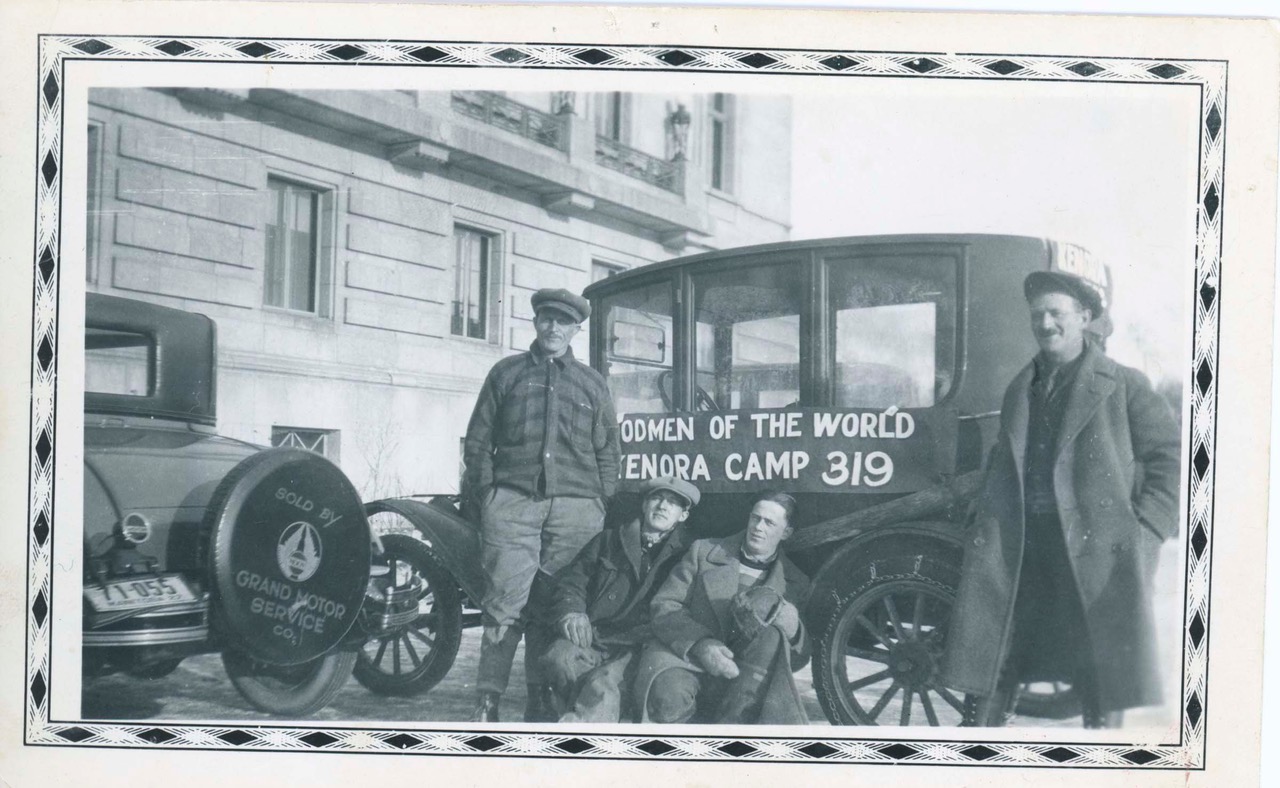 This is the stepping off point to talk about Kenora before there was a road to Winnipeg and to tell the story of how four men, Hans Westin, Gus Englund, John Englund and Hjalmar Erickson, made the very first trip to Winnipeg by car in 1927, a full five years before the highway was built. We’ve just passed the 90th anniversary of that trip in December, so I decided to look a little more closely at this story.

What was happening in Kenora at the time? What was public sentiment? How did these four Swedish Canadian woodsmen end up being feted by the Mayor of Winnipeg and given keys to the city? In researching this story it soon became clear that the first car trip in 1927 was much more than just a story of four men on a frozen adventure, but rather it is the amusing tale of the not-so-subtle effort of Kenora, Winnipeg and others to publicly lobby their provincial governments to build a highway between the cities and join the east to west on a route for auto tourists from across North America. To put it simply, in more ways than one, this is the story of building a road.

Canada was changing in the 1920s. The rise of the affordable automobile and the economic boom after World War I caused a groundswell of support for roads and highways. Canadians were yearning for the freedom of the open road and for elected officials to make it happen. The Department of Northern Development Act of 1926 was largely based on developing and creating infrastructure to support northern development and mining. Central to this plan was the creation of highways to connect Ontario from Kenora in the west to Ottawa in the east.

It was in this climate in 1927 that a request for proposals was issued to build a road from Kenora to Fort Frances. Work had already begun on Highway 17 in the east, a project that would eventually connect Kenora to Ottawa by way of North Bay.

When business interests in Winnipeg saw the flurry of road building in Ontario they hit the panic button. Throughout the fall of 1927, newspapers in Winnipeg featured editorials urging politicians to connect Manitoba to Ontario. A November issue of The Winnipeg Mirror laid out the fears very plainly: Winnipeg was afraid that the road loop of Kenora-Fort William-Duluth-Minneapolis would be too attractive for auto tourists to pass up. The author wrote, in no uncertain terms, that this eastern route is “much more attractive than the open prairie.” In addition, the Canadian Dominion Government was considering the area around Ingolf and Shoal Lake for a new national park. Mining claims in the area had already been suspended. If this park plan was to move ahead it would complicate the building of a connecting highway considerably. The time to act was now. 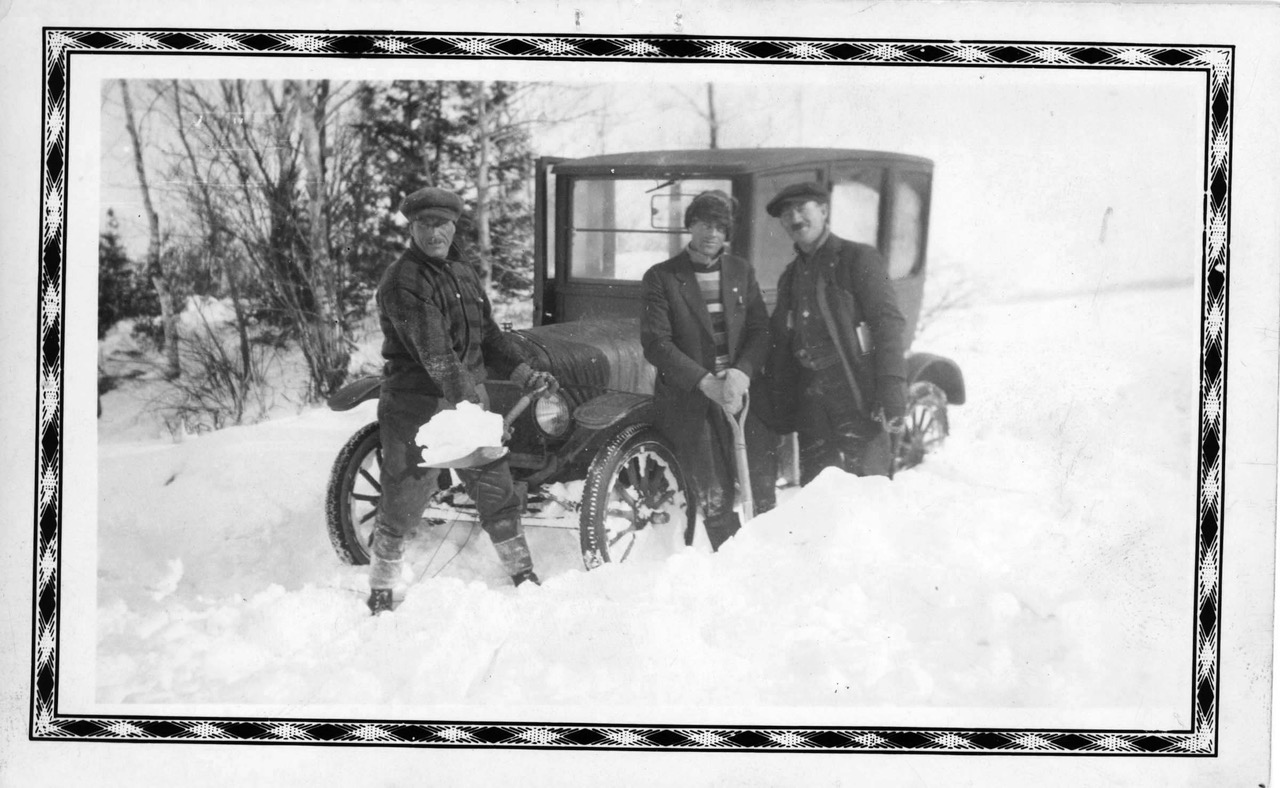 So that sets the scene for December 1927 when our four intrepid adventurers, Hans Westin, Gus Englund, John Englund and Hjalmar Erickson, decided to load into a Model T and make the overland trip from Kenora to Winnipeg for the first time. The four men were Swedish Canadian immigrants who had all been living in Kenora for some time. We know that Hans Westin was a prospector, but have little information on the others. Perhaps Hans was inspired to make the trip because he was concerned about mining prospects being curtailed by the national park plan? Perhaps they had knowledge of the route from working in the woods? Whatever the case, they loaded into their car in the early morning hours of December 27th and set off across the Lake of the Woods. 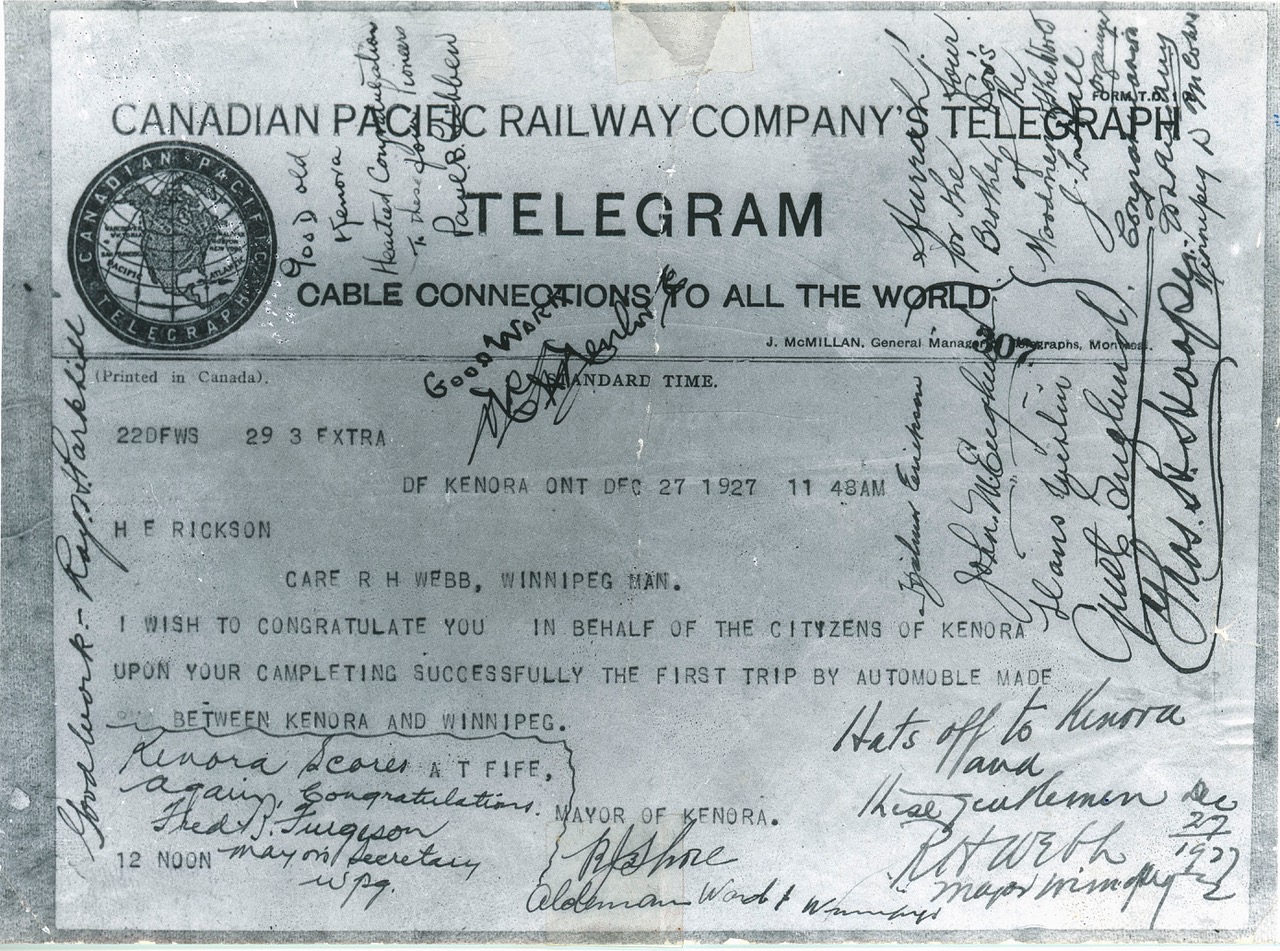 The foursome travelled in a Ford Model T sedan. There was no heater or defrost so their view was kept clear by folding open the top half of the windshield like a vent. The recorded temperature that day at the University of Manitoba’s St. Johns College was about -18˚C. While that does seem a bit harsh it also meant that the men didn’t have to deal with slush and had good hard ice on the lakes. Deep snow was a bit of an issue and they did have to do some shovelling, but the Model T is surprisingly well suited for off-road driving. The reality of life in the 1920s was that most roads were not paved so cars were designed for rugged travel. Tall wheels and chained tires, along with weighing only 1,200 lbs., made the Model T part car, part tractor, and surprisingly nimble off road.

The route the men took west had them bounding over frozen swamps and muskeg. First over Lake of the Woods, then dipping south into Fox Lake, then straight across Shoal Lake. From there they got back on land at the settlement on Indian Bay, Manitoba. We don’t know the route the four adventurers took after getting off Shoal Lake, but it stands to reason they followed the route of the Shoal Lake aqueduct at least until they hit a highway. They arrived in Winnipeg at 3:00 a.m. Their trip time was 21 hours. Upon arriving in the city they found a telegraph office that was open, probably at one of the train stations, and sent word to Kenora that they had arrived. Word spread quickly and the account of their pioneering trip made the headline of the Kenora Miner & News the same day, on December 28th.

The news report extolled the men as “citizens imbued with the spirit of the pioneer” and reported that their journey apparently “started a wave of enthusiasm for a connecting highway between Kenora and Winnipeg.” We know that enthusiasm already existed in some circles and this reporting leads me to believe this trip was a calculated effort to promote the idea of building a highway, rather than four men marking a George Mallory style “because it’s there” adventure. In addition, the men carried with them a letter from Kenora Mayor A.T. Fife addressed to Winnipeg Mayor R.H. Webb. The letter expressed a hope that this trip was “but a forerunner of one in the future when two lines of automobiles will meet at the boundary and open an official highway between the provinces.” Again, this sort of language and the fact that they had the letter from the Mayor to begin with leads me to believe that this trip was a calculated public relations effort and a successful one at that.

The four men spent December 28th with Mayor Webb and other City of Winnipeg officials. They were given a grand reception at City Hall and received the keys to the City. The keys were presented to them only hours after arriving. Perhaps they were pre-engraved? The next day they were the guests of the manager at the Ford Motor Company plant in the city (now the Robert Fletcher Building at 1811 Portage Avenue), where they toured the plant and took promotional shots of their Model T and the new Model A. From there they visited the Manitoba Tourism Bureau at  the Parliament Building where they registered both their names and their car as guests. Finally, to cap off the day the four Kenora Swedes were guests of the T. Eaton Company for a grand buffalo dinner where again they were presented with official congratulations from Mayor Webb.

Based on the language and the conduct of city officials in both Kenora and Winnipeg, a good case can be made that 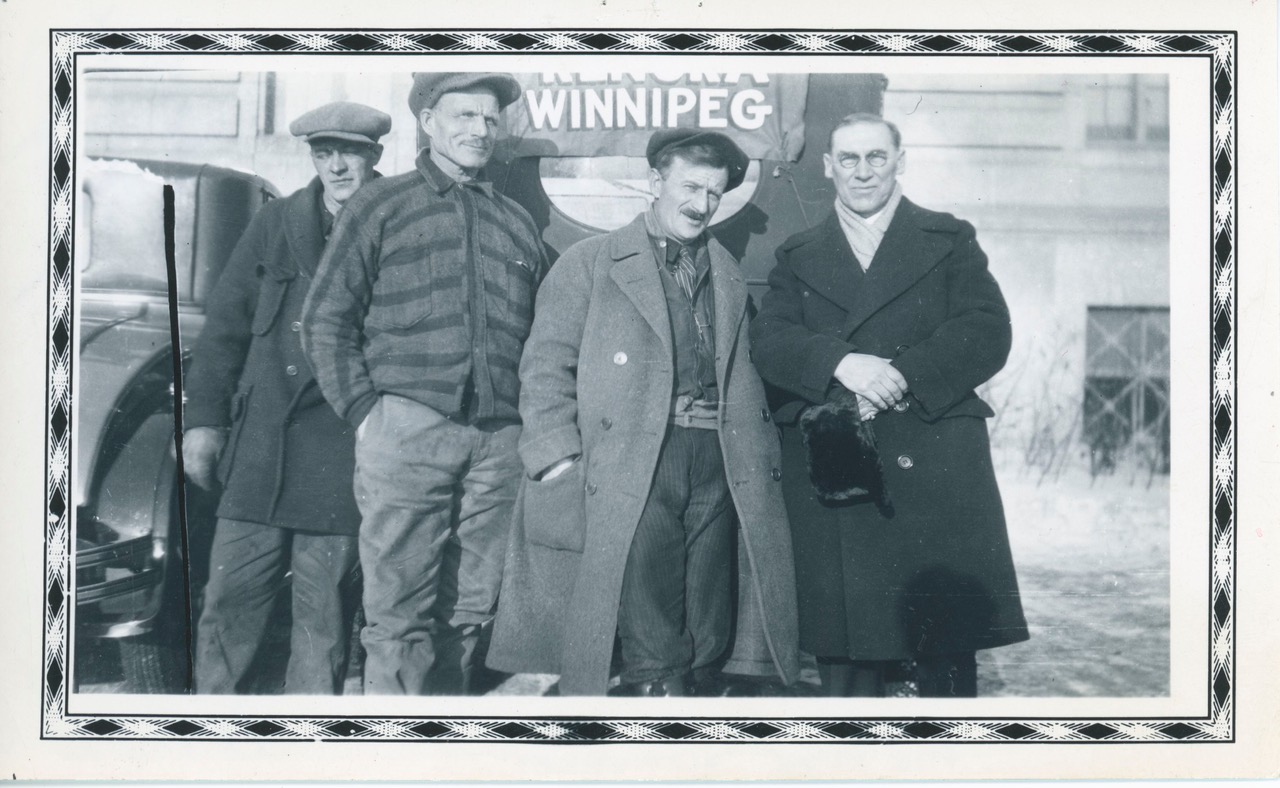 Building the Road to Save the Town →