Sometimes it’s necessary for a mayor to take matters into their own hands. In June 1907, Kenora mayor Charles Belyea did just that…with some explosive results!

The steam tug Couchiching was built in Rat Portage in 1883 for the Rainy Lake Lumber Company (RLLCo). The word “Couchiching” is an anglicized version of the Anishinaabemowin word “gojijiing” which refers to the inlet leading to Rainy Lake and the lake itself. The RLLCo was operating the saw mill on Laurenson’s Creek at the time, and business was booming. The Couchiching was one of the largest and most capable vessels on the lake with a length of 93 ft and a width of 20 ft. Her steam engines, from the Doty Engine Works in Toronto, made 26 horsepower at the screws. For the next 15 years the Couchiching was a working tug, pulling log booms from the south end of the lake to the mills in Rat Portage.

Work on the lake was hard on the equipment, and the hulking tugs often had a short lifespan. Some time in the late 1890s the Couchiching was tied up on the eastern side of Langs Island across from downtown. We don’t know if it was there for repairs or storage, but the Couchiching sat there for over 10 years. During that time she partially sank and became a real hazard for recreational boaters and work boats alike. Abandoning old boats on the lake was unfortunately common at the time, but so close to town? Something had to be done. 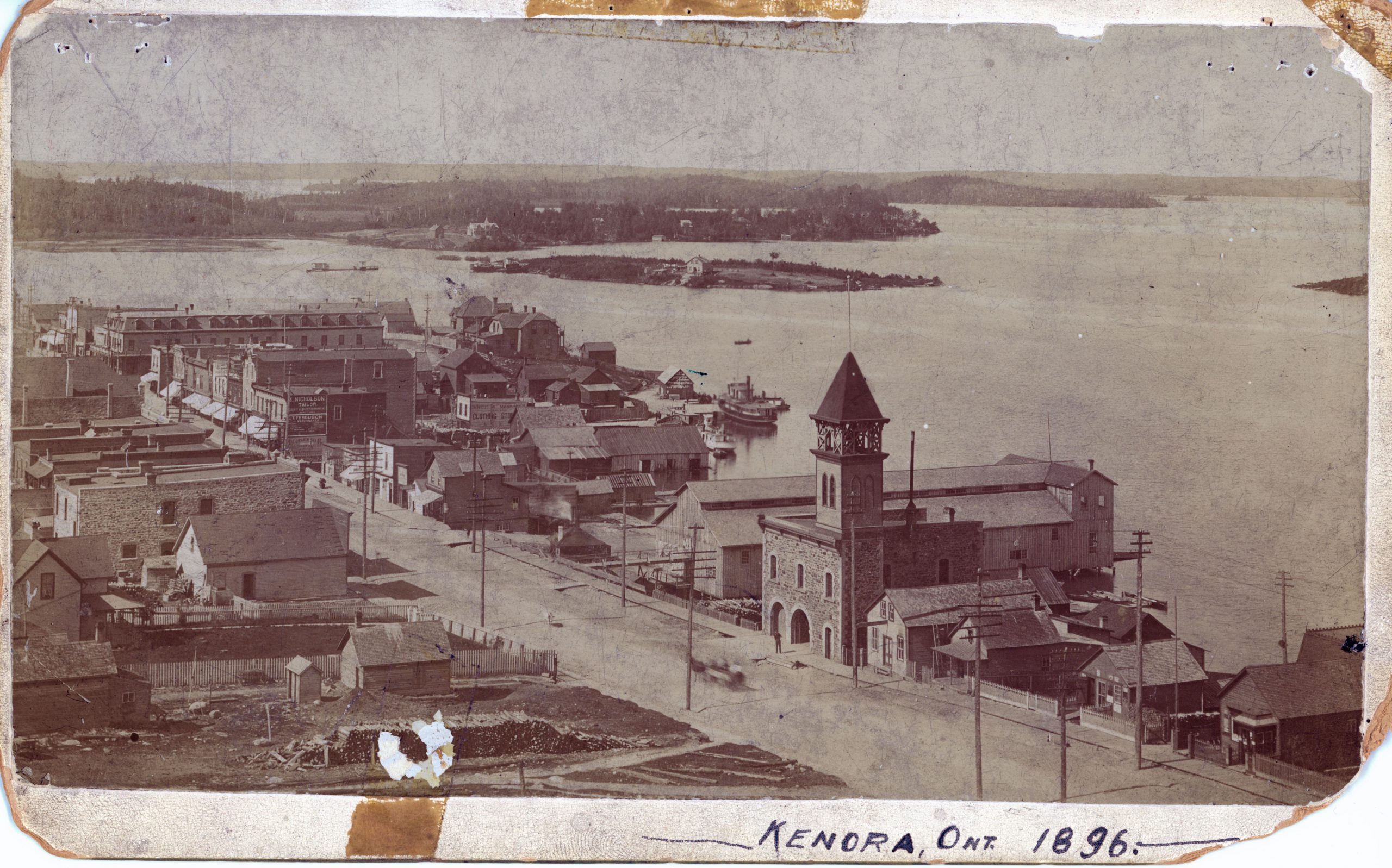 The Couchiching beached on the southeast corner of Langs Island. The Main Street of Kenora is in the foreground. Coney Island is in the background.

Now it is a little cliché to say that “times have changed” when talking about the past, but this story is a great example of just that. Seeing the need for something to be done, Mayor Charles Belyea floated a DIY plan to Council to get rid of the derelict wreck— he would blow it up. A bit shocking to the modern audience, but apparently a viable strategy in 1907, because Council thought it was a great idea and gave him the green light.

So, on the morning of June 6th, 1907, Mayor Belyea and local demolitions expert Thomas Foy purchased five boxes of dynamite (about 700 sticks or 350 lbs), and loaded them in a boat destined for Langs Island.  Between the two of them they spent the morning wiring up every nook and cranny they could find on the nearly 100 ft vessel. As they finished up a small crowd gathered on the shore to see the show. As the crowd looked on the detonator cord was touched to a battery and—

In a flash the Couchiching was blown to smithereens. A 150 ft water spout tore into the air and, with it, pieces of the derelict craft. Despite the crowd on the shore the majority of people in town had no idea it was going to happen. Later it was reported that people thought it was an earthquake, or perhaps blasting for the railway. In any case, it must have been a shock to look across the bay and see a 150 ft water spout with little pieces of a derelict steamboat mixed in. Doubly so when those little pieces started raining down on the community. But, despite the shock in town, people were thrilled there was finally some action to get rid of the boat. The local media reported that finally the derelict wreck was removed, and that there would be “no regrets.”

Times have changed, of course, but it is worth looking back on the DIY nature of Kenora’s past, and how that has shaped the community. Mayor Belyea wasn’t an expert in explosives or marine salvage, but he was a municipal leader who saw a community need and acted on it. In 2021 we don’t solve our problems with hundreds of pounds of dynamite, but we still have dozens of helpers in the community, who just like Mayor Belyea, identify a need and help to fix it in our own DIY ways.

The story of the Couchiching got us thinking about another one of our favourite explosive stories, this time it’s a story about how the steamer Kathleen began its life with a bang— literally!

The Kathleen plied the Winnipeg River for 11 years, making daily runs to Minaki and taking picnickers and cargo to all places in between. The Kathleen was built in Kenora or, more specifically, on the ice in Rideout Bay during the winter of 1906. The Kathleen was not a small craft, at over 60 ft long and 14 ft wide, so it was an impressive feat to have it ready to launch on March 31, 1906.

The ice was still very thick on the bay in late March. Clearly though the decision was made that the craft would be floating that day by any means necessary.  Ice saws were brought up, and lines were cut in a massive rectangle around the Kathleen. That didn’t do the trick, unfortunately, and now the craft was sitting on a giant floating ice cube.

The Kathleen’s crew were undeterred, however, and instead of waiting a few weeks for the ice to melt they decided to drastically escalate the situation. One of the crew members got a stick of dynamite and wired it up under the ice. The crew took cover and blew the ice in the bay to pieces. Unfortunately because of the cuts in the ice, the giant ice cube the Kathleen was sitting on was apparently unharmed. But, once the rest of the ice was broken up the crew was able to slide the Kathleen off the giant ice cube and into the water, and by the end of the afternoon she was floating proudly in the bay. 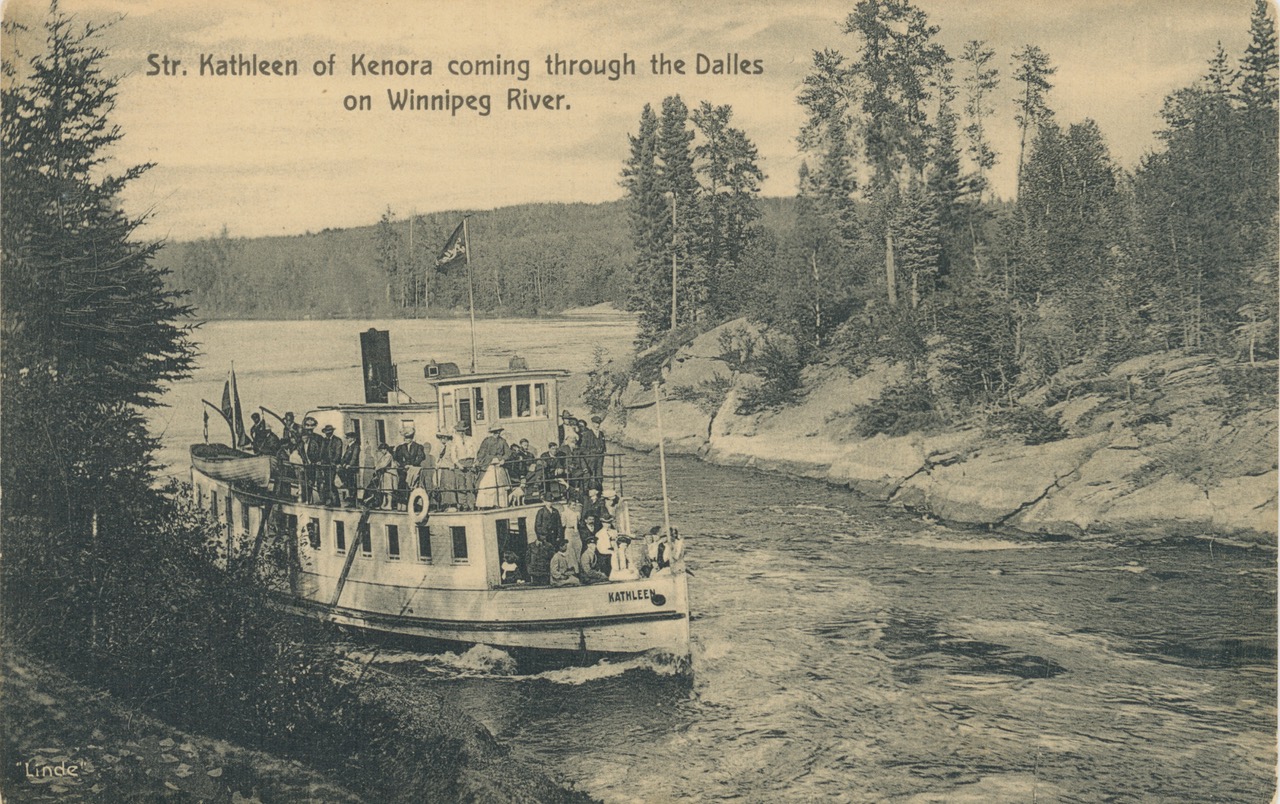 Str. Kathleen of Kenora coming through the Dalles on Winnipeg River.

The Kathleen made runs on the Winnipeg River for the next 10 years, eventually being retired in 1917. In her lifetime she transported thousands of people for both work and play. And while those picnic trips were no doubt exciting, perhaps the most exciting day of the Kathleen’s life was the day that she was floated the first time, and started life with a bang.

← The First Argyle The Ballad of Sundin's Scorpions →

During the Second World War German prisoners of war were brought to the Lake of the Woods area to cut wood for the local mills.  Many of the prisoners enjoyed their time in the Canadian wilderness, and a number of them immigrated to Canada when the war ended.