The Gift of Art 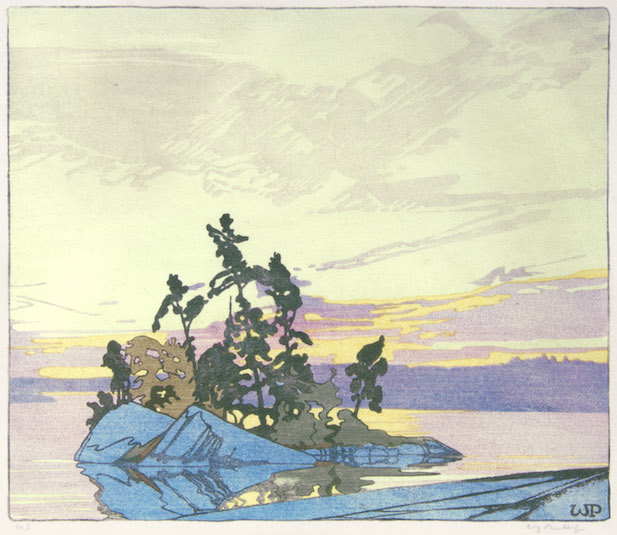 Walter J. Phillips is one of Canada's most celebrated artists, who created hundreds of watercolours, etchings, engravings and colour woodblock prints. Upon his arrival to  Winnipeg with his young family from England, Phillips was taken by the Canadian landscape. Throughout his career spanning the 1900s through the 1940s Phillips would exhibit his work across Canada, the United States and the United Kingdom. Few other Canadian artists have left such an enormous body of work as Phillips, whose subjects included the people and landscapes of his native England, Northwestern Ontario, the Canadian prairies, the Rockies, and the coast of British Columbia.

Watercolour would be a consistent medium throughout Philips’ career, both as masterful English style paintings and plein air studies. As a printmaker, Phillips would ultimately come to prefer and produce more colour wood block prints than etchings or engravings. Upon his introduction to the Japanese colour woodcut he became an avid student and dedicated himself to perfecting the technique. Phillips would adapt his newfound medium with a contemporary vision of the Canadian landscape. An innovator and technician, Walter J. Phillips is considered the master of colour woodblock printing in Canada.

His technical expertise combined with an ability to convey the majesty of the landscape makes for a style that connects with people. Walter J. Phillips' artwork is avidly acquired by collectors privately, publicly and corporately, both nationally and internationally. W.J. Phillips' pieces are numbered in the collections of many outstanding institutions including the Smithsonian, the Victoria and Albert Museum in London, and the National Gallery of Canada.

Historically there are few artists that have painted Lake of the Woods; it was Walter J. Phillips who gave national voice to the artistic expression of the area. It is his work that is the strongest tribute to the landscape of this region of the Canadian Shield, with its 1400 jack and white pined rocky islands dispersed across an immense and awesome lake. For over thirty years Lake of the Woods inspired etchings, engravings, colour woodcuts and watercolours. Philips’ masterful technique and distinctive style would bring a worldly attention to this region. Walter J. Phillips is a pillar in Canadian Art with his work an integral thread in the artistic fabric of this nation.