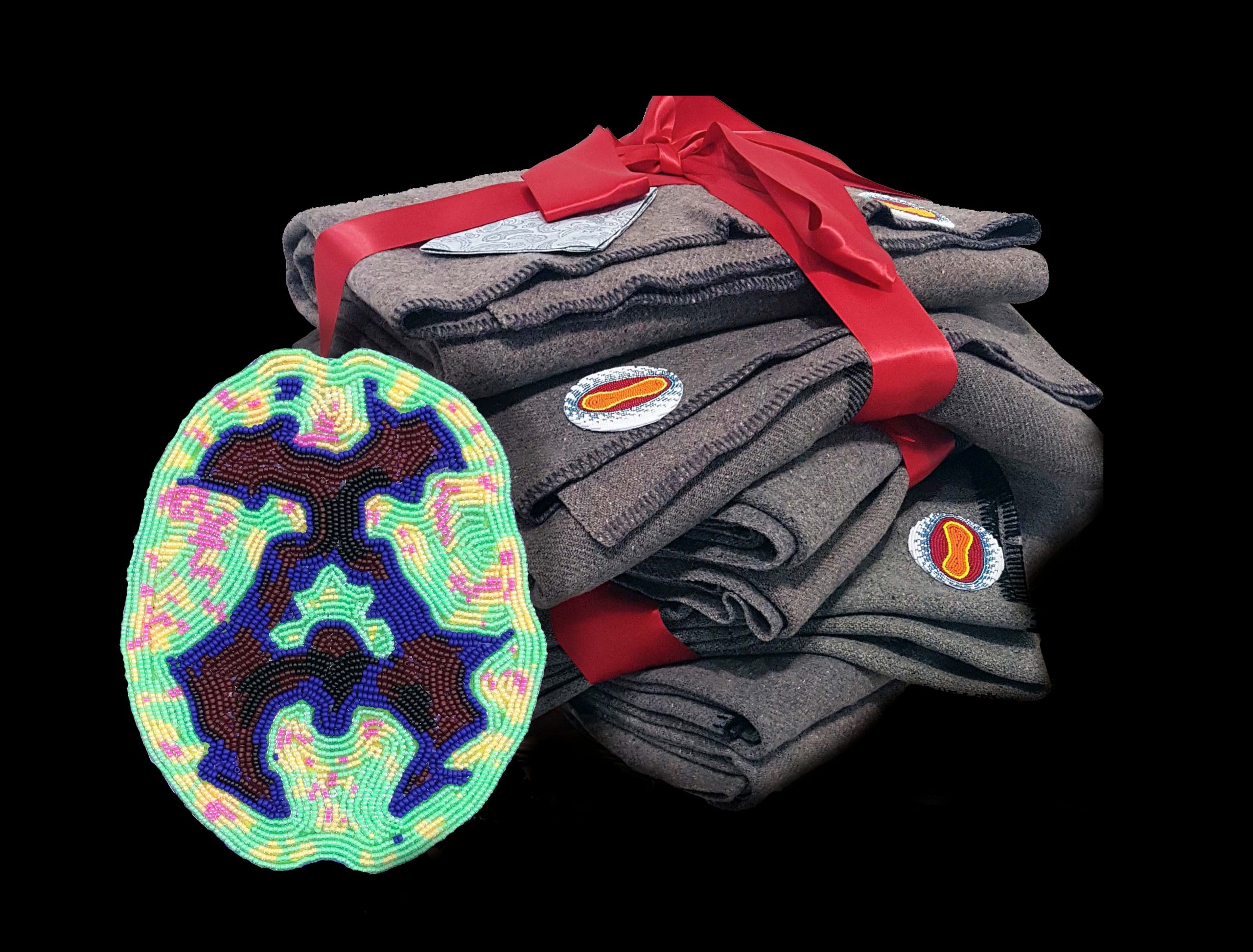 Ruth Cuthand was born in 1954 on Treaty 6 Territory, in Prince Albert, Saskatchewan, and she is of Plains Cree and Scottish ancestry. She is a member of Little Pine First Nation but spent most of her childhood in Cardston, Alberta, near the Blood Reserve. For more than 40 years she has used her art as a platform to present historic and contemporary Indigenous/settler experiences, with an emphasis on Indigenous health. Cuthand challenges contemporary perspectives of colonialism through printmaking, painting, drawing, photography, and beadwork.

Always striving to speak with her own voice, Cuthand rejects all stereotypical ideas and forms of Indigenous and “high art” expression. She takes freely from both traditions as it suits her, developing a language easily recognized and uniquely her own. “In my work, I challenge the status quo by exposing the inequities that have plagued, for centuries, Canada’s relationship with its First Peoples, while proudly claiming a complex and self-determined Aboriginal identity.”

Choosing to express herself through beadwork, Cuthand honours Indigenous women. Continuing work in this tradition is demonstrative of the resilience of Indigenous peoples while affording a contemporary voice addressing subjects of interest. Her colourful, beautiful pieces engage an audience in an otherwise challenging conversation, creating an opportunity to contemplate the work and what it means. “I have found that making work which confronts the most difficult truths about Canadian society and the impacts of colonization on Aboriginal people are made remarkably palatable when delivered in a seductive package.”

Ruth Cuthand’s work is highly collected by private and public collections as well as being the subject of publications and film. In 2020, Cuthand was awarded the Governor General’s Award in Visual and Media Arts. She lives and teaches in Saskatoon, Saskatchewan.

BEADS OF TRUTH brings a greater awareness to the history of diseases which devastated First Nations peoples upon contact with European settlers, brings to light specific historical campaigns to subjugate Indigenous peoples, addresses current struggles of poor conditions for those living on First Nation reserves, and acknowledges the intergenerational trauma inherited by subsequent generations through today.

This exhibition was made possible due to support from the Kenora and Lake of the Woods Regional Foundation.

Walter J. Phillips visited Lake of the Woods in the summers of the 1910s -1920s. This distinctive landscape would serve as inspiration until 1940.