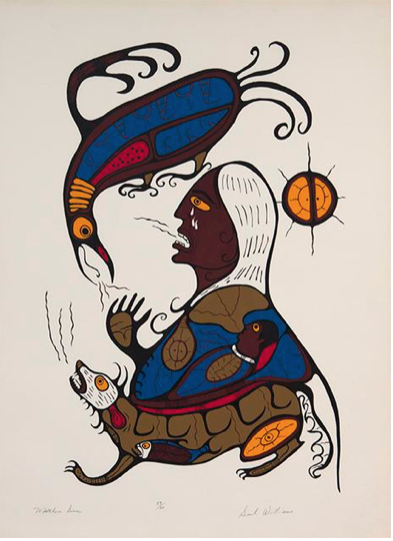 Featuring the artwork of many important Indigenous artists from our region who established a profound and resonating legacy with regards to how contemporary Indigenous artwork is perceived and respected in Canada and the world. In the early 1970s, not long after First Nation peoples received the right to vote, artists struggled to have their work recognized, to break free from the image that their work was merely ethnographic, primitive paintings. GAA-NIGAANII ONIDAAWIZIWAD/LEADING ARTISTS is a celebration of the paintings and serigraphs from the artists of the Professional Native Indian Artists Incorporation (PNIAI) and the Triple K Co-operative Incorporated printing company.

The Professional Native Indian Artists Incorporation was formed in 1973 and was one of the most significant early artist alliances in Canada. PNIAI, also known as the Indian Group of Seven, was the coming together of seven artists: Daphne Odjig, Jackson Beardy, Eddy Cobiness, Norval Morrisseau, Joseph Sanchez, Alex Janvier, and Carl Ray. The ideals of the group were to shift how Indigenous art was viewed, to stimulate young artists, to develop marketing strategies and contacts to promote artwork through prestigious art galleries, and to secure funds in support of artists. Although this group did not stay together for long, their influence would birth an evolution in the landscape of contemporary Canadian art.

The Triple K Cooperative was created in 1973 in Red Lake, Ontario, by brothers Goyce, Henry and Joshim Kakegamic along with their father David. This organization was the first Indigenous owned and operated silk-screen printing company in Canada. Their mission was to empower Indigenous artists to be in full control of their artwork, from concept to final product and distribution. Triple K produced and distributed the works of Goyce Kakegamic, Joshim Kakegamic, Paddy Peters, Barry Peters, Norval Morrisseau and Saul Williams to over forty galleries across Canada for ten years. This garnered Triple K serious recognition from the art industry, both for the uniqueness of their artwork and Co-operative success.

GAA-NIGAANII ONIDAAWIZIWAD/LEADING ARTISTS to our knowledge, is the first exhibition of its kind. Never before have these two important artist groups, founded in the same era, who paved the way for change have been exhibited together. Their artworks are captivating and meaningful, embedded with the knowledge and symbolism of their rich culture. Theirs is an art so unique to this region that many were and are still asked to exhibit their work internationally. The coming together in exhibition of these two artist alliances is a commemoration of these pivotal artists that forever changed the world of contemporary Canadian Art.

The Muse would like to thank the Kenora and Lake of the Woods Regional Community Foundation and the Ontario Cultural Attractions Fund for their support of this exhibition.