In the still of a crisp winter morning, our town must look like it has for the past 120 winters. The cool waters of the lake are softened by a glistening mantle of snow. Bare tree branches sparkle with hoar frost. Jewel-like icicles drip from rockcuts. On such a day, the landscape itself harbours a sense of peace, a rightness with the world, a brightness of spirit, and a kindness towards its inhabitants.

The early settlers of Rat Portage had much to contend with their first winters here. The snow, the bitterness of sub-zero temperatures, the isolation, the loneliness, and the wilderness. I’m sure they saw little kindness in their surroundings of bush and barren rock, yet they stayed. And when Christmas came, they celebrated.

Christmas in Rat Portage was a community celebration. Perhaps the isolation, and the distance from extended families, was behind this tradition of the whole town gathering together.

Masquerade balls on Christmas Eve, Sunday School Christmas Trees held on Christmas Day, and carnivals on Boxing Day made up some of the season’s celebrations.

While the churches had actual Christmas trees which were unique at that time because most homes didn’t, they also held Christmas pageants called Christmas Trees. 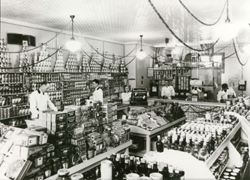 In 1893, the Presbyterian Church Christmas Tree was held in the Music Hall. Singing, recitations, and other entertainment were part of the evening’s activities. The Methodist Church Sunday School Christmas Tree followed shortly after Christmas Day.

In 1884, the Granite Rink was opened by Fred Hemmings. On December 26th, he held the Granite Rink First Grand Carnival, offering prizes for the best half-mile hurdler. A full band provided the music and skaters enjoyed the luxury of having dressing rooms and a restaurant available to them.

Besides the community gatherings, local residents spent a great part of the holiday season visiting one another. For a young community, Rat Portage quickly adopted the social niceties of larger centres.

Calling days became a regular part of community life. In fact, one young bride who moved to Kenora from Maine referred to the town as a society place. She expressed her concern in a letter to her mother that she wouldn’t have enough dresses for all the social events, receptions and visiting that was required of her.

The town was divided into sections and each section had regular receiving days, such as the 2nd and 4th Thursdays of every month. On those days, residents of that area were to remain home to receive callers from the other parts of town.

During the holiday season though, it was customary for the men to go a-calling. New Year’s Day was Men’s Calling Day. Gertrude Horan wrote in her history of Rat Portage that the calls began in the afternoon and stretched into the evening.

The men were served fruit cake and wine at each house and if the men were not care-free when they started they certainly were by the time they made their last call. Since most of the coming and going was done on foot, it was not surprising that some were not able to find their own homes until the next day.

The dining rooms of the local hotels presented magnificent Christmas feasts. Herbert Williams recalled his Christmas dinner at the Rideout House in 1882. The hotel, built in 1879, on what is now the southeast corner of Main and First Streets, was a three-storey frame structure, which housed many of the town’s early visitors.

On that Christmas Day, Mr. Williams was seated at the Ontario Table, so called because most of those who sat around it were representing, in one way or another, the Ontario government’s claim to Rat Portage against Manitoba’s similar claim.

The bill of fare for the evening was:

Gifts, too, were part of the Christmas tradition, Gertrude Horan recalls:

On Christmas morning the doors or wainscot of a room with the largest stove was gaily decorated with stockings of all colours, shapes and sizes. The small children believed, or tried to make themselves believe that Santa came down the miles of pipes and through the stove. Lucky was the little girl if she received a doll, or a small son a sleigh and a red mesh bag of candies and nuts.

One gift, two at the most, was a real Christmas for them!

Local businesses often included gift ideas in their advertisements. For the boys, there were hockey sticks and pucks, air guns, pocket knives, sleds, and harmonicas. For the girls, small brooms and dust pans, fancy combs and barrettes, and doll carriages. 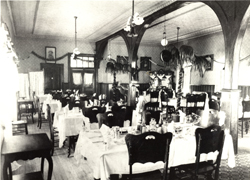 The dining room of the Commercial Hotel on Chipman Street was decorated for Christmas, 1908

To attract customers and add to the festive appearance of the town, some businesses went to great lengths to decorate their stores. In 1893, D.T. Ferguson’s jewellery store on Main Street became the talk of the town with its glittering decor. Ferguson had designed the light display and then called in the Citizen’s Electric Company to carry it out. On the ceiling of his store, he placed three diamond-shaped frames. each electrically connected, and on these were arranged 13 incandescent lights, alternating in red, purple, and green colours. Over the entrance to this store, 15 lamps were hung, flooding lights out onto the street and making his storefront an eye-catcher at night. A miniature ferris wheel, also aglow, and laden with golden watches, diamonds, and gems revolved in his front window.

Christmas, then as now, was also a time to help those less fortunate. While the decorations, the gifts and the food were all beautiful and exciting parts of the Christmas tradition, they were merely window-dressing to the spirit of community in the small town. The helpfulness and concern lasted long after the Christmas tree was laid bare, and the turkey bones were made into soup. If someone needed a helping hand, there were those that were there to offer it.

Surely of all the traditions of a Rat Portage Christmas, that’s the one most worth keeping.