The lot of the summer student is often dictated by the dreaded phrase— “other duties as required.”  Sometimes that means helping with a special event, setting up chairs, or cleaning up after the farmers market.  In April of 1972, however, for Town of Kenora summer student Gerry McMillan, it meant committing some “light” arson on behalf of the citizens of Kenora, having it become front page news, and accidentally knocking out cable tv for the entire town.

Gerry got ahold of the museum about a year ago looking for some photos.  One thing lead to another, and Gerry gave us the whole run down of events that day.  He finds it quite amusing (and so do we) and has given us permission to share his tale on the 50th anniversary of his brush with fame (and flame).

It was a matter of addition by subtraction.  On the Kenora harbourfront there were a number of boat houses that by the 1970s were looking very tired. Where once they housed the motor launches of local elites, now they were at best an eyesore, and at worst a real hazard. Something had to be done, and quick.

The boathouses were built on city property. Many of the people who had built them back in the 1920s had long since passed away. There was a plan on the horizon to renew the harbourfront, but first something had to be done about the mess. A private citizen had taken it upon themselves to burn one of the boathouses down. So, a plan was hatched among town staff to go in and finish the job.

Enter summer student Gerry McMillan (and his fellow summer students).  Gerry had been going to school in Peterborough, and was back in Kenora for the summer. When he and his new coworkers arrived at work this morning and were instructed in their task.

“You know the old boathouses on the harbourfront?”

“Take these cans of gas and burn them down”

So, as dutiful summer students off they went with jerry cans in tow.  The plan was pretty simple— check out the boathouses, make sure they are empty, then slosh around some fuel, and light them up.  And that’s exactly what they did. 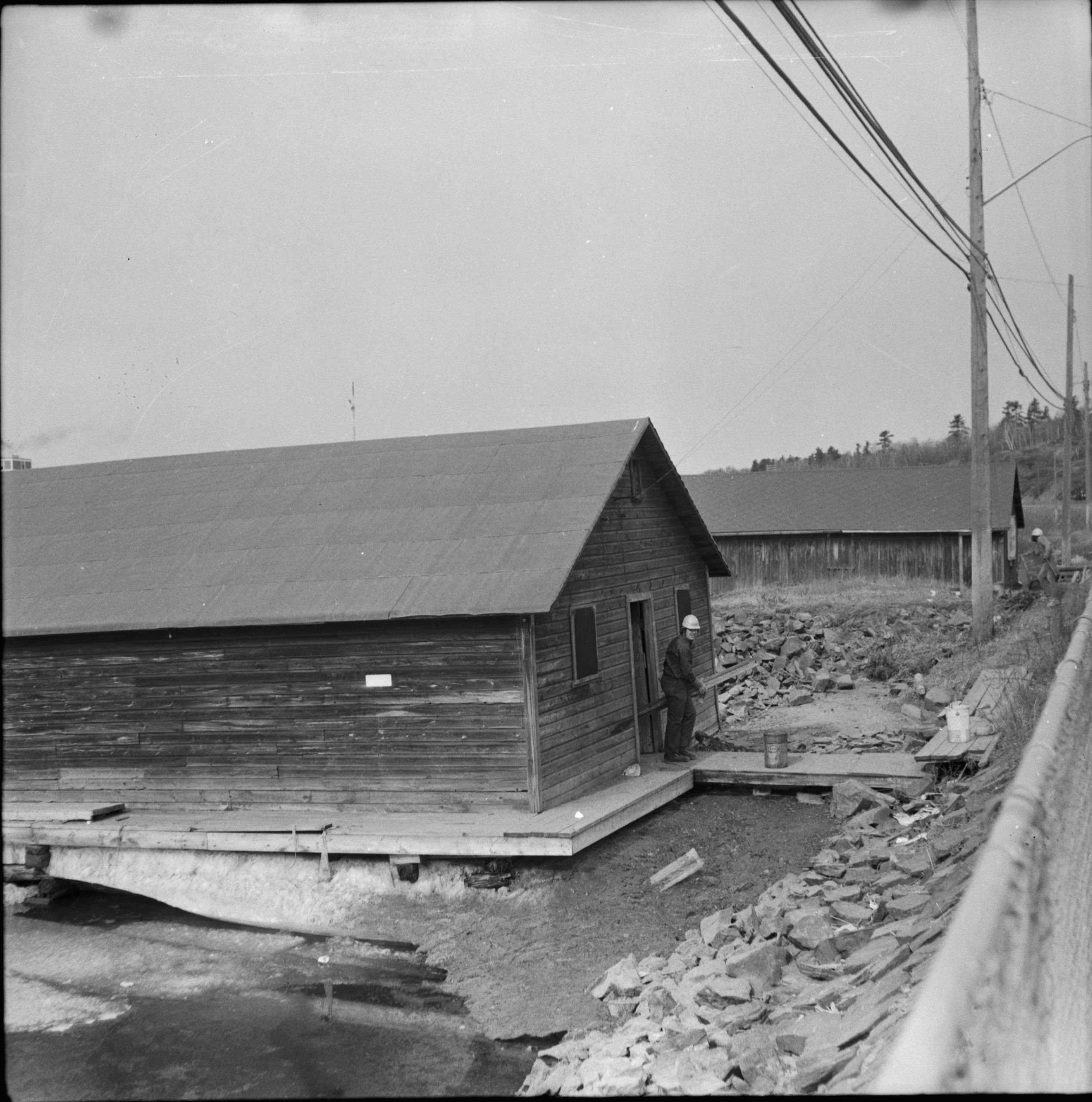 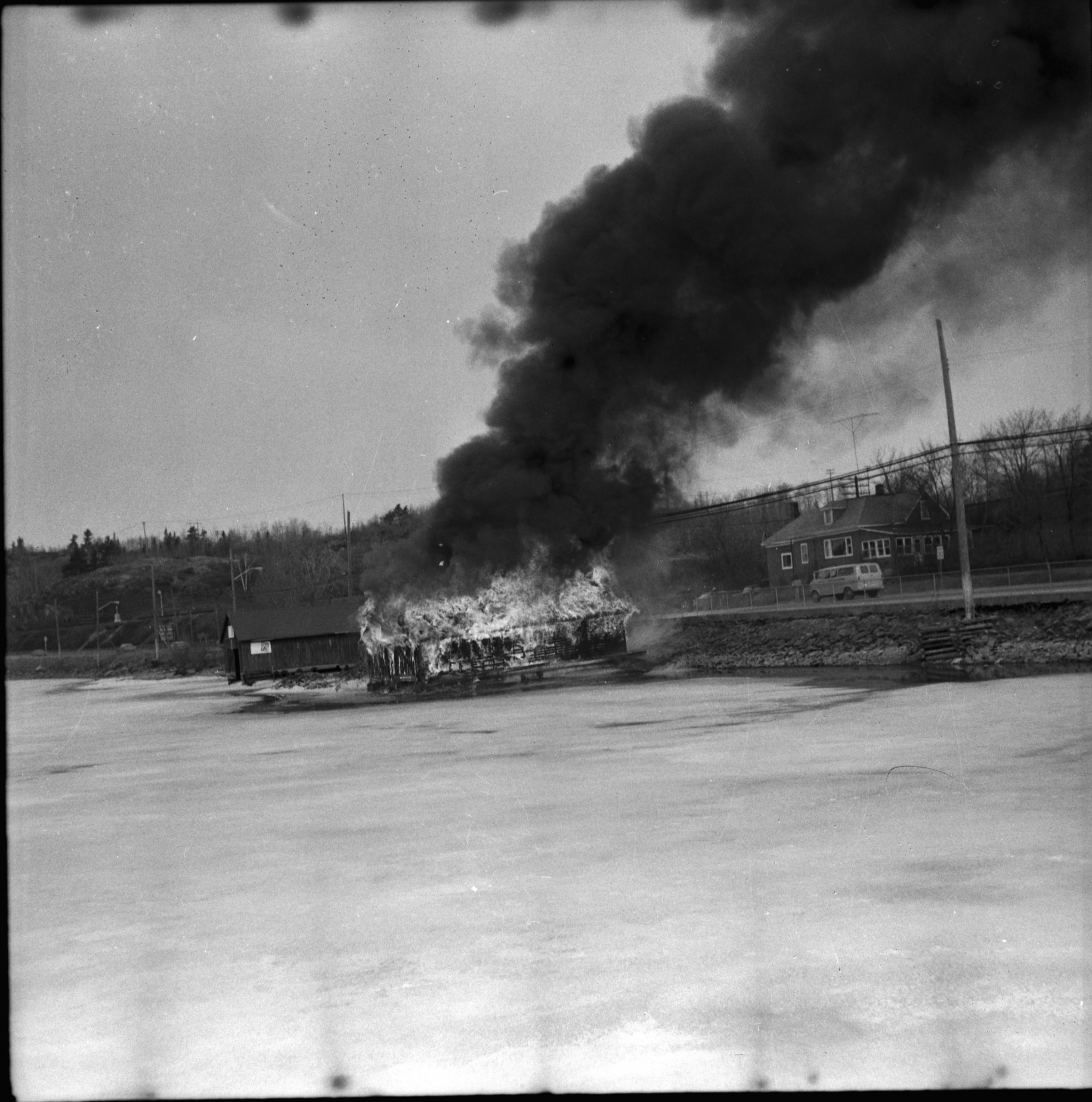 Local news man Clarence Dusang heard there was something happening on the harbourfront, so he grabbed his camera and off he went.  As he arrived he snapped a photo that would make Gerry locally famous, or perhaps infamous.  The image of McMillan standing in the door of the boat house appeared on the front page of the Kenora Miner and News, and also appeared in the Winnipeg Tribune. As the poster boy of the operation, Gerry was teased the rest of the summer over it.

With the fires lit the boat houses went up in flames.  Unfortunately the plan went a bit sideways when the wind shifted toward the telephone and cable lines.  Doubly so because the boathouses were lit before the fire department had arrived to supervise the controlled burn.  Tripley so when the flames burned the cable TV lines and knocked out TV for the entire town.  Unfortunately for local Boston Bruins fans, that night Bobby Orr and his Bruins were playing St. Louis in the NHL playoff semi finals.  (The Bruins won 6-1)

No one was hurt in the blaze, and it did quite a bit to clean up the look of the harbourfront.  Later Gerry recounted, “ I guess I could say myself and the other members of crew that day played a small part In contributing to the beautification of the waterfront. Ha!”  It was a wild day, but damage to the telephone and cable lines notwithstanding, it was a successful operation. Recounting the tale in a January 2021 email Gerry wrote, “I must say we weren’t laughing that day, however I can look back at it now with a smile.”