One hundred years ago, the concept of objective reporting often seemed to have escaped the writers of the day. Their accounts of council meetings, accidents, and criminal activities were rife with personal embellishments and opinions. While we might frown upon such reporting these days, there’s no doubt that it makes for a darn good story.

We present to you a recent discovery of such a journalistic gem in the February 13, 1903 issue of the Rat Portage Miner. Enjoy.

WAS TRACKED TO EARTH

Ex-Ald. McCarthy Tracks A Man Who Stole a Coat and Makes Brilliant Capture

Yesterday morning a guest at the Russell House reported to the proprietor, Mr. J.G. Gaudaur, that he had lost his overcoat. The guest hung it up on a hook in the rotunda when he went into breakfast, and on coming out again found the overcoat gone. 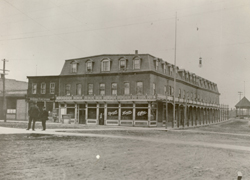 The scene of the crime, the Russell House

Mr. Gaudaur tried to communicate with police headquarters, but found that Chief Woods was off duty, Constable Johnson was down east, and Detective Emmons of the provincial police was on business in Keewatin.

Ex-Alderman McCarthy was in the hotel at the time and volunteered to take the case. The gentleman who had lost the coat described the garment, and Mr. McCarthy, noting the size and build of the man, made a mental note of the circumstances and began work on a most interesting case.

Mr. McCarthy is of a very observant turn of mind, and naturally looks for a cause in every little circumstance. Coming out from breakfast that morning, he saw a man put on an overcoat and survey himself in the hat stand very critically. Then Mc sized up the coat and observed mentally that it was worth $45. The gentleman who lost the coat said he bought it the day before for something like the amount guessed by Mr. McCarthy.

The ex-Alderman then started out on a hunt for a man and a coat, visiting the billiard rooms, bowling alleys, and saloons and finally locating his man in the Opera House bar-room. He had a companion with him whom the amateur detective called to one side and told him of the state of affairs. The companion told the man with the coat what he heard but the Coat indignantly denied the charge. Leaving a shadow in the bar, Mr. McCarthy went up to police headquarters but only to meet again with disappointment as Detective Emmons had not yet returned. The case was, however, outlined to Judge Young in the meantime, and the now thoroughly enthusiastic amateur went back to the Opera House, and learned from the shadow that the Coat had gone to the Shaw Hotel. He went to the Shaw and relocated the Coat, and after a time, accosted him coming out of the building. McCarthy now told the man that he must give up the coat, but the Coat made a swift move and bolted, only, however, to be tripped up by a deft manipulation of the detective’s cane between the man’s legs. Forgetting everything else in the excitement of the moment, Mc jumped upon the prostrate Coat and grabbed him by the collar.

If you go quietly, I will not put the darbies on you, said the detective. This was a bluff, pure and simple, but the Coat did not call it, and offered to go to the Opera House and hand over the coat to the detective. This was satisfactory and the Coat was marched triumphantly into the hotel. Here, the Coat gave the ex-Alderman the slip, and ran full speed down Second Street, followed in hot pursuit by Mr. McCarthy. He yelled to Tommy Walsh to stop the man, but he did not understand. Mr. McCarthy kept up the chase and was within ten feet of his quarry when it bolted into the Albion House. Thinking he had him for sure this time, Mr. McCarthy walked leisurely into the house, only to learn, to his intense chagrin, that the Coat had skipped out the back way, ran up the lane, and escaped. This was where the ordinary professional detective would have quit the game and got interviewed by the newspapers, but not so with our hero. I’ve put me hand to the plow, he said, an’ begorra it’s me that’ll finish the furrow.

Mr. McCarthy’s work, between this point when the Coat vanished apparently forever and when the great denouement took place, would make Sherlock Holmes look like 30 cents. He set to work and one by one he forged carefully each link in the chain that was to encircle the Coat and drag it back to the rightful owner.

After a few hours’ patient toil, Mr. McCarthy found the coat, but alas the man who assumed it was not inside it. He sold it to another man for seven dollars. Here was our detective’s one and only clue, now useless. He could no longer hunt for a Coat, a specific and unique article of wearing apparel which could be unhesitantly picked out, it was a man he wanted now, a man, an animal with the hiding instinct, and human cunning, with a predilection for lifting things, and Mr. McCarthy started again after his quarry.

What transpired now could fill a book, but let it suffice to say that before six o’clock last evening, Mr. McCarthy walked into police headquarters and told Detective Emmons to go to track No. 38 in the CPR yards, where he would find boxcar No. 008763 A, containing the man who stole the coat. Emmons went and got the man,

At police headquarters, the man gave the name of Wilson, which satisfied authorities but not Mr. McCarthy, who nonchalantly observed that the prisoner’s name was Lyons.

When he appeared in the police court this morning, Wilson, alias Lyons, pleaded guilty to the charge of stealing the coat, and will be brought up for sentence tomorrow. McCarthy got the name of Lyons from the register at the Albion House. He says he comes from Montreal. Mr. McCarthy found out that he came here from Winnipeg.

In 1870 the Wolseley Expedition went through this area on route to the Red River Valley. Major General Garnet Wolseley got impatient and set out to cross the lake in a storm.  He got lost on the Lake of the Woods for two whole days!