A Day at the Lake

Tourism and lake life have been a huge part of Kenora’s economy since the beginning. In fact, some of the first people to travel to the new town of Rat Portage in 1882 were curious visitors from Winnipeg. Now much ink has been spilled over the years talking about the camps and cottages on the Lake of the Woods. While it’s fun to talk about the palatial summer estates and luxurious 40 ft motor launches of the rich and the famous, it’s also worth remembering the thousands of visitors and tourists who came to the lake via much simpler means— on a day trip from Winnipeg. This is the story of one such trip. But this wasn’t some two bit picnic.  This is the story of when 5,000 people, over 10% of the population of Winnipeg at the time, made Rat Portage their destination for a day of fun in the sun.

Beginning in the 1880s, many community groups, unions, and churches in Winnipeg planned yearly out-of-town summer picnics. By the 1890s these excursions had become a pretty big part of the city’s social calendar. These picnics weren’t just a meal outdoors, they included a full day of activities and fun for the whole family. One of the largest picnic groups in Winnipeg was the Winnipeg Caterers Union. The Caterers Union represented thousands of hotel and restaurant workers in the city. In 1897 they had nearly 2,000 people attend their annual picnic trip held in Portage Le Prairie. When the Caterers Union got together to choose their picnic site in July 1898 they had one focus— to plan the biggest picnic anyone had ever seen. Their destination? The popular summer holiday town of Rat Portage.

At the time there was no highway from Winnipeg to Rat Portage. Everyone who was coming to the picnic would have to travel by train from the CPR Terminal in the north end of Winnipeg to the station in Rat Portage. In order to succeed in making this the biggest picnic ever, the President of the Caterer’s Union, Mr. K.J. Johnson, proposed a special ticket rate of $1.00 ($0.50 for kids) for the day. This was a deeply discounted rate. The regular round trip fare for travel between Winnipeg and Rat Portage was $7.75. At the time a good wage was $1.50-$3.00/day.

So the discounted rate, while still a bit pricey, was within reach of the regular Jane and Joe. The Caterers Union decided at their July planning meeting that a crowd of 2,000 people would be considered a grand success.

While the plans were being made to transport the crowds, there were also preparations happening in Rat Portage. The population of the town was a little over 4,000 people in 1898, so this was an “all hands on deck” situation. The local organization would be handled by the the Rat Portage Rowing Club. Mayor James Savage was a member fo the RP Rowing Club and helped gin up support among the locals. Ads were put in the Rat Portage Miner newspaper encouraging locals to join in the festivities. One ad read:

There are over 300 canoes here, and there must be in the neighbourhood of as many row boats. These, with the small steam launches, could make a display unequalled  in any other place and it would be a great attraction.

It might even be safe to say that the Mayor wanted to show off Rat Portage as a premier boating destination… In any case, Mayor Savage further put his thumb on the scale by declaring Tuesday, August 23rd, a local public holiday. Finally in a stroke of unrelated luck, the workers of the Rat Portage Lumber Company were on strike for better pay and shorter hours in August 1898. The strike was resolved later in the fall, but what it meant in the meantime was that many workers in Rat Portage and Norman could join in on the festivities. The Winnipeg Caterers Union Picnic was shaping up to be one fo the biggest parties Rat Portage had ever seen.

Leading up to August 23rd the weather forecast called for rain.  Some people panicked and sold their tickets at a discount to friends and neighbours. Parents took advantage and bought tickets for their whole families. Teens and young lovers bought tickets because a rainy day with their sweetheart was better than a sunny day at home (and a trip out of the city was a good chance to slip away from the crowds). When all was said and done over 4,000 full tickets and 1,000 kids tickets were sold— more than double what they had hoped for.  Five thousand people was about 10% of the population of Winnipeg at the time, and more than the total population of Rat Portage! In modern terms, this would be as if a group of 75,000 Winnipeggers came to Kenora on a Tuesday in August.

After a month of hype, the day finally came. On the morning of the 23rd the weather broke and the sun poked through the clouds as the people made their way to the CPR station. The massive crowds caused a street car traffic jam all around the CPR stop. The picnickers were afraid they were going to miss the train so a crowd of thousands tumbled off the street cars and preceded on foot to the train platform. The Caterers Union had chartered three trains of 11 passenger cars each. The first train was set to leave at 7:00AM, and the platform was already crowded by 6:00AM. After the first train left, the second followed at 7:35AM. The third train was the most crowded of all of them and left at 8:05AM. There were hundreds of disappointed picnickers who could not fit on the final train, so the CPR honoured the $1 dollar fare on the Atlantic Express train, which left at 8:50AM. All four trains that left that morning were standing room only. Ladies were given the seats, and children were put in the overhead sleeping berths. Each train was supplied with a band for entertainment— the Band of the 90th Winnipeg Rifles, the Citizens of Winnipeg Band, and the Jubilee Band. As the trains chugged east the bands played popular tunes and there was excitement in the air for the fun day ahead in Rat Portage.

The first train arrived in Rat Portage at about noon and thousands of Rat Portagers came out to meet them.  The entire town had been decorated with flags, bunting, and huge evergreen arches over Main street. The local arrangement committee arranged for the steam ferry boats Keenora, Edna Brydges, Kenina, Shamrock, and Phantom. Throughout the day the steamers took over 1,000 picnickers to Coney Island Beach and Keenora Beach on Wolf Island, and on sightseeing tours along the north shore of the lake.

For those who wanted to stay in town there was a slate of games and activities planned at the Rideout Park Athletic Grounds (the old paper mill site).  There was a baseball game between Winnipeg and the Rat Portage Baseball Club that Winnipeg won 10-7.  In lacrosse, the Rat Portage Lacrosse Club evened things out by defeating their rivals the Winnipeg Victorias 6-1.

On Main Street there was pow-wow that featured 50 dancers, and a performance by the Winnipeg street busker/comedian “Laughing” Joe Nattaway. The pow-wow was a popular feature with the crowd.  In 1898 there is a good chance that many of the onlookers were new Canadians who had never been to a pow-wow and who had only read about them or heard stories and this was their informal introduction. In addition to the pow-wow, the Winnipeg bands and the Rat Portage Town Band set up around downtown, on the ferries, and on the harbour front to entertain the crowds. 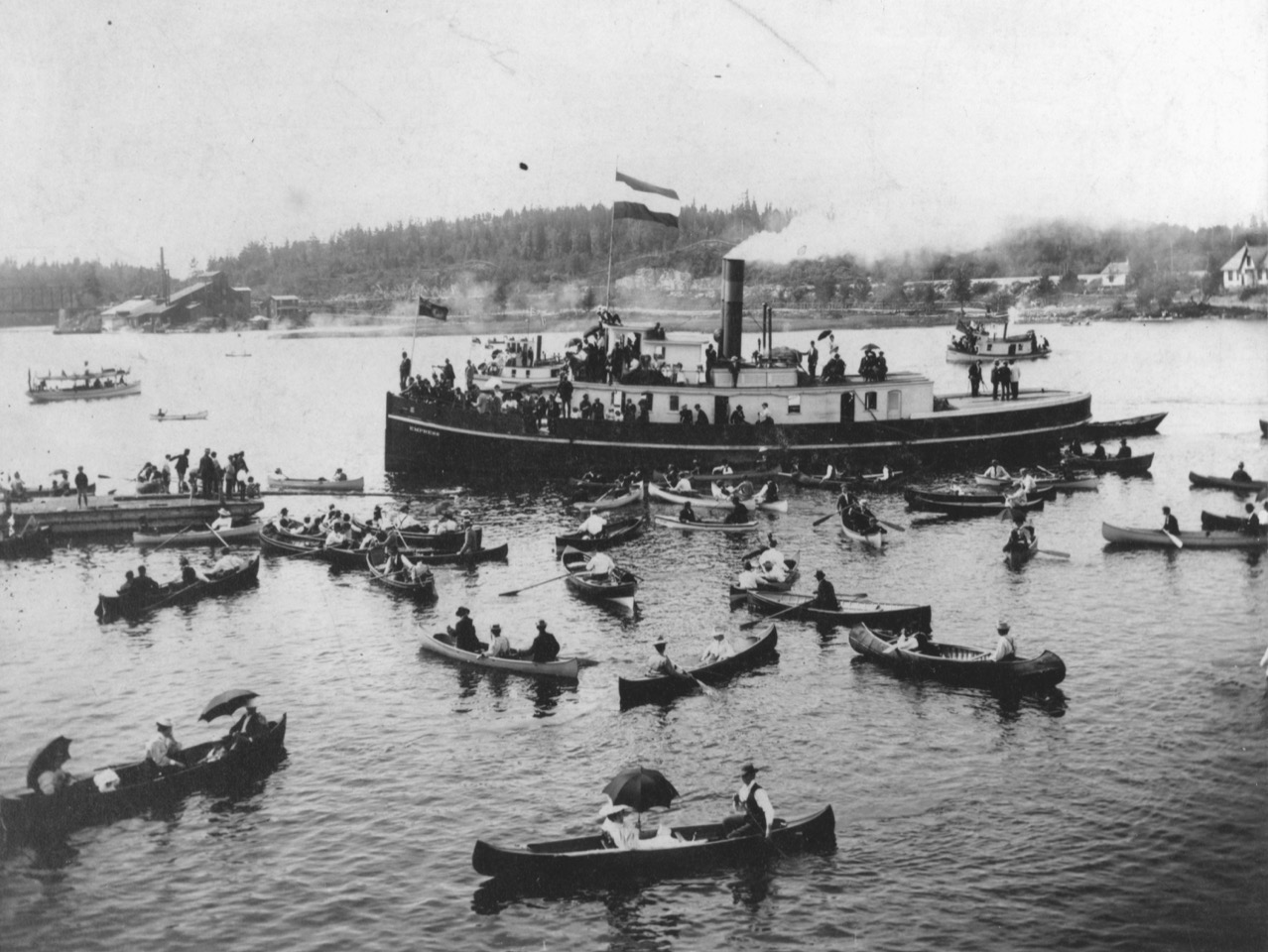 The harbour front was where the main event of the day was to take place. World Champion sculler Jake Gaudaur was scheduled to give a demonstration and Jake’s brother Charles was going to have a prize rowing match against John Hackett. The problem was that the locals took the mayor’s message about boating to heart and absolutely filled the harbour with decorated boats and canoes. The excitement of the crowd was a blessing and a curse— it made for a very impressive view, but there was no room for Jake Gaudaur to safely give his demo with so many boats in the way. After the word was sent out to clear a path the $300 prize race did proceed. The crowds roared as the two rowers kept an even pace for the first half of the race, but in the home stretch John Hackett pulled out to a comfortable lead and never looked back.

In addition to the boat races and the ball games there were also a number of other things going on through the day. There was a trap shooting contest on McCarthy Point on Coney Island hosted by the Rat Portage Gun Club. A number of young lovers snuck away from the crowds to find romantic nature walks including taking a walk down “Lover’s Lane” which is one of the original portage trails on Tunnel Island (still a popular date spot today). Finally the hotel kitchens and restaurants of town were packed all day. Several of the news stories report how impressed they were that establishments didn’t run out of food and drink.

As the day’s events wound down that evening there is no doubt there were many sunburned smiling faces and heavy eyelids. The CPR sent two additional relief trains from Winnipeg that evening to make sure everyone had a ride home. The first of five trains left Rat Portage around 7:00PM and arrived back in Winnipeg just after midnight. To cap off a very wild and busy day, as the third train lurched back to Winnipeg, a woman went into labour. Luckily Dr. George Orton, a medical officer for the CPR and a former Federal Member of Parliament, was on the train and delivered the baby. With momma and baby doing well the train continued through the night, ending its trip with one more passenger than it started with.

Overall the Winnipeg Caterer’s Union picnic excursion to Rat Portage was a massive success.  In its story the next day the Winnipeg Free Press summed it up perfectly writing—

That the citizens of Rat Portage know how to entertain their guests there can be no doubt, for the manner in which they looked after the visitors yesterday proved conclusively that they are adept in this respect. The best of accommodation was provided and any amount of amusements, and what more could a crowd want.

When you stop and think about the numbers involved, it is staggering that the organizers pulled it off. Such a successful day was only possible because the whole town came together to welcome the Winnipeggers and to introduce them to the area and lake that we love.

As we slowly get back to normal and welcome our summer friends back it is worth remembering this timeless lesson from those that came before— happiness never decreases by being shared. So just like the people of Rat Portage in 1898, in 2020 let’s share our happiness and love of the lake with everyone for now and for years to come.